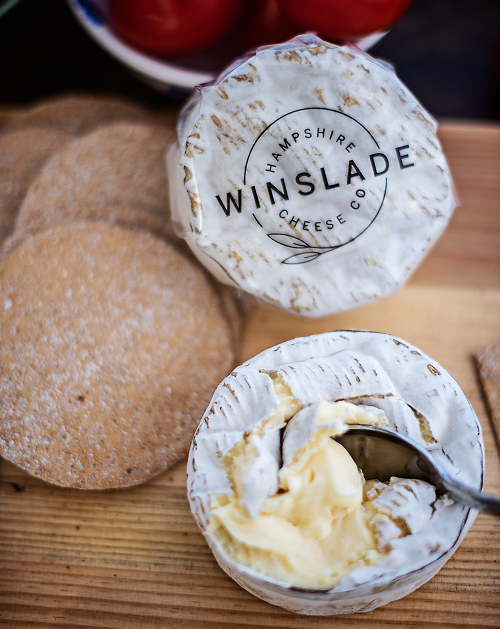 Hampshire Cheese Company’s Winslade has been named Class Winner at Melton Mowbray 2021 Artisan Cheese Awards. Winslade is named after a hamlet in central Hampshire near to the dairy where it is made alongside its better known older sibling, Tunworth – memorably described by Raymond Blanc as 'the best Camembert in the World'.

Winslade is a Vacherin/Camembert cross encircled by a spruce collar which gives Winslade a distinctive pine note. It has a pinkish hue, dappled rind and is soft, rich and unctuous with a floral earthiness. Hampshire Cheese Company also received a Gold Award for Winslade and Bronze Award for Tunworth.

Other Hampshire artisan cheesemakers picking up Awards included Lyburn Farmhouse Cheesemakers whose Old Winchester won both a Gold and Silver (in different Class categories), while Stoney Cross, Lightly Oak Smoked and Lyburn Gold each won Silver. Two Hoots Cheese received Highly Commended for both Barkham Blue and Barkham Belle in addition two Golds and a Silver for Barkham Blue and a Gold for Barkham Belle. Finally Four Brothers Cheese, a youngster on the local cheesemaking scene, won Bronze for Bryony.

The Artisan Cheese Awards are unique - designed to support small, artisan cheesemakers in the UK and Ireland. There are 16 classes in total, with a Winner and Highly Commended in each class, plus Gold, Silver and Bronze Awards. Judges are chosen carefully and include representatives of wholesalers, cheesemongers, retailers and deli owners (ie those who might buy the cheese they are judging) as well as the Academy of Cheese food writers.