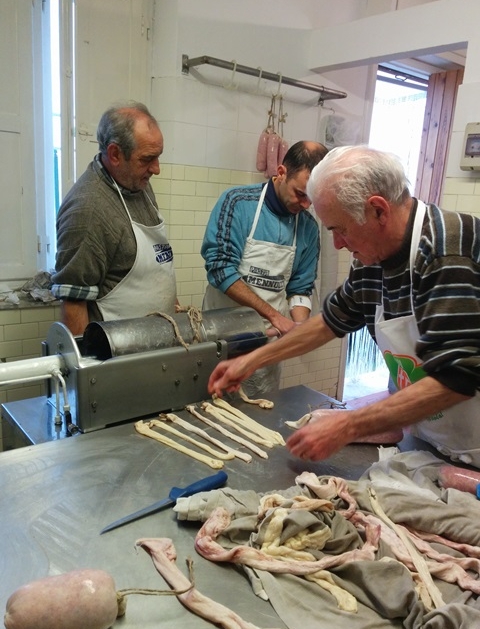 Sarah and John Mills, the owners of Parsonage Farm near Andover diversified into charcuterie several years ago after taking part in a course run by Hampshire Fare and funded by The Prince’s Countryside Fund. They now supply local restaurants as well as selling their delicious products from their farm and at local events. They recently returned from a trip to Tuscany where they took part in an advanced salami workshop.

“We spent five days immersed in all things cured. During our stay we learnt from four very different norcini (pork butchers). It quickly became apparent that whilst salami may look similar the method is a very individual process. One butcher was a perfectionist who spends at least two hours trimming every bit of fibre out of the meat before making the salami to ensure that there wouldn’t be any tough bits.

A pig's head was boiled for Soppressata and we were given lessons in all the different sausage skins. Seasoning was scarcely used with the butchers opting for cinnamon, fennel and a little wine. Although most were guarded with their seasoning secrets!

We were encouraged to taste as we learnt. This is never a problem for me although uncooked sausage was not something I had experienced before. Whilst it felt wrong at first I soon embraced the raw meat eating and by the end of the course I was ready to turn vegetarian after consuming so much cured meat!

One butcher took us on a twenty minute drive up a steep mountain to see his pigs. We were surprised to see the type of pigs, nearly all middle whites as during the last war most of Italy’s native pigs were lost. Only a couple of native breeds are safe from extinction but the butchers seem happy with the middle whites and they choose to let them grow very large until about two years old. At home our British breed pigs are outdoor reared with plenty of space, sadly this was not the case for the Italian pigs we met.

We managed to fit in plenty of eating as well as learning including a delicious meal in the tiniest restaurant I’ve ever seen.  We returned home well fed and full of ideas and inspiration and a renewed enthusiasm. We have already set to with using our new knowledge and look forward to sharing the results!”

Visit the Parsonage Farm website to find out more about how to sample and buy their charcuterie.