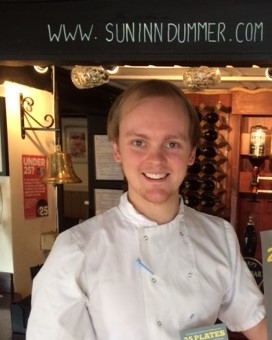 Hampshire Fare member, The Sun Inn in Dummer, near Basingstoke has been awarded 2 AA Rosettes, one of the most coveted awards schemes that recognises the UK’s outstanding places to dine.

Of all the restaurants across the country, approximately 10% are of a standard which is worthy of 1 Rosette and above. The success or failure in achieving Rosettes is based on at least one visit to a restaurant or hotel, where the entire meal including the ancillary items are assessed.

The Sun Inn’s 25-year-old landlord and head chef, Gordon Stott, is recognised as one of the UK’s most exciting young chefs. He has been a two-time finalist in the Graft Guild of Chefs ‘Pub Restaurant of the Year’ Award in 2015 and 2016, also known as the ‘chefs Oscars’.

Earlier this year, he reached the finals of the UK’s first Parliamentary Pub Chef of the Year competition, having been nominated by MP for North West Berkshire Kit Malthouse, and attended the much-publicised final at the Houses of Parliament.

Gordon has many ambitions he is determined to achieve and one of them was to gain an AA Rosette for the pub, he comments: “We have been desperate for the AA to visit The Sun Inn for many years. The visit is always a surprise so the quality of your cooking has to be continuously on point Can you change this to more consistent instead of one point?