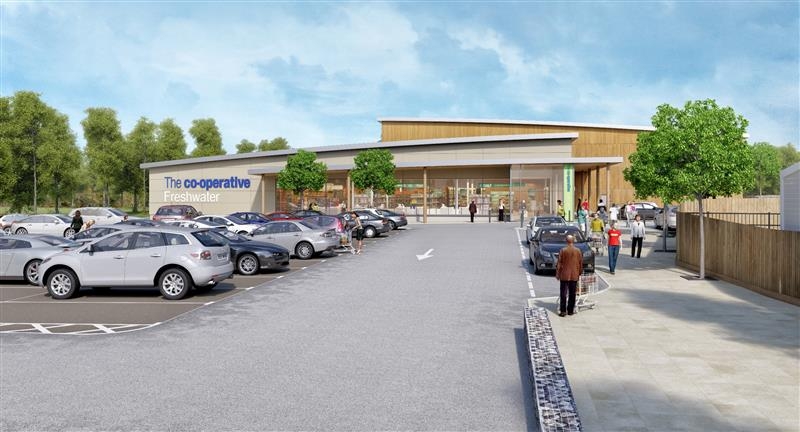 40 new jobs are being created on the Isle of Wight with the opening of The Southern Co-operative’s flagship community store in Freshwater in early 2015.

The Southern Co-operative currently employs 330 colleagues on the Isle of Wight in its 12 stores, 6 funeral branches and distribution hub which co-ordinates supply and delivery of its Local Flavours range from the Island’s local food producers. The new store, which is currently being built in Afton Road, Freshwater, will be The Southern Co-operative’s largest store across its estate in southern England.

The 40 new colleague roles will join the current team from the existing Freshwater store, located just across the road from the new store, which will close with the opening of the new flagship store. As well as a much bigger and improved product range, improvements at the new store include a larger bakery offer, a self service deli with entirely locally sourced meats and fish, a greater range of fresh vegetables and fruit and fine wines with a sommelier station to offer tastings, an increased range of ‘free from’ foods to cater for special dietary needs, a coffee area as well as a Post Office and ATM. A significant increase in the variety of local food and drink on offer will see over 40 Isle of Wight producers now supplying the store’s Local Flavours range, consolidating The Southern Co-operative’s commitment to support for local producers on the Island. The number of parking spaces will double compared to the existing store, and will include an electric vehicle charging point.

Paula Hunt, Head of HR Operations at The Southern Co-operative said:
“Colleagues are our greatest asset here at The Southern Co-operative and we are looking for 40 people who have a positive outlook and who share our values to join our business. As a co-operative, we have always had a purpose beyond profit; being actively involved in and supporting the communities where we trade in order to make a positive difference.”

Paula added: “Successful applicants will join us from late January to undergo training in time for the new store opening early next year. The Southern Co-operative is a successful independent business which continues to grow year on year, so new colleagues will have opportunities and a real chance to get involved and grow with the business.”

The Southern Co-operative is holding a recruitment event on Friday 28 November 11am-7pm and Saturday 29 November 10am – 4pm at West Wight Youth and Community Centre in Freshwater. Applicants are invited to attend at any time during either day to complete an application form and have an interview. Application forms are also available to download at tscjobs.co.uk prior to attendance if desired.