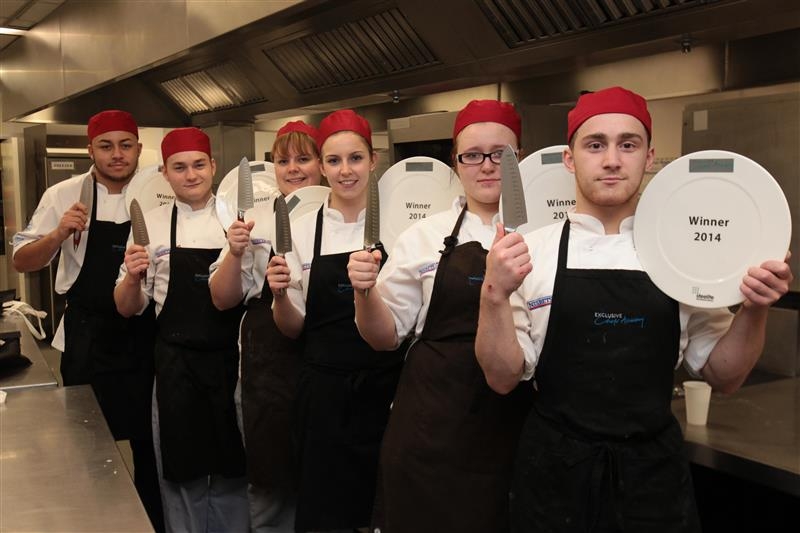 Aspiring chefs from the Exclusive Chefs’ Academy went head-to-head in a Hell’s Kitchen meets MasterChef-style event to mark the half-way point in the programme’s annual calendar.

Under the guidance of current MasterChef: The Professionals’ champion, Steven Edwards, and Executive Chef of the Academy, Andy Mackenzie, the chefs were split into two teams, Red and Blue. Each had to devise, create and deliver a winning menu to a group of over 40 academy suppliers, producers, college lecturers and sponsors at South Downs College in Waterlooville.

Team Red narrowly scooped the prize for their menu of Squid Ink & Crab Ravioli, Sea Food Velouté with Brown Shrimp Dressing, followed by Lamb Shoulder & Cannon of Lamb, Textures of Kale, Celeriac, and Burnt Butter Parfait, Pear and Coconut to finish.  Steve Mould from Flint & Flame presented members of both teams with a beautifully boxed wood-handled kitchen knife and Sue Stephens of Steelite awarded the members of the winning team with a commemorative plate to mark their achievement.

Andy Mackenzie commented, “The teams have worked tremendously hard over the course of the last six months, taking inspiration from their day-to-day learning and their offsite visits to our brilliant suppliers and producers. Today we have witnessed a good dose of competitive spirit and an unrelenting passion to win from both teams; both created fantastic plates of food that tasted delicious and looked stunning on the plate.”

Steve Mould, of Flint & Flame agreed, “I have been blown away by the quality of the food and the wonderful flavours experienced today, but also the incredible technical ability and skill from such a young group of chefs. The Exclusive Chefs’ Academy presents each chef on the programme with a fast track opportunity to learn from the very best in the industry and I am delighted to be a part of its success.”

The Exclusive Chefs’ Academy is the brainchild of Mackenzie who, together with Exclusive’s group of award-winning restaurant chefs, has carefully designed a two-year intensive plot-to-plate programme to both attract and nurture aspiring talent to the industry.

Each chef within the academy undertakes on-the-job training, attends off-site supplier visits and supervisory skills workshops, embarks on team challenges and benefits from masterclasses with the Exclusive Hotels and Venues’ chefs, including 2-star Michael Wignall at The Latymer, Pennyhill Park, 1-Michelin star Matt Gillan at The Pass, South Lodge and 1-Michelin star Richard Davies from The Bybrook at The Manor House.

The programme is one of a kind, delivering a rare opportunity for aspiring chefs to learn in two years what might typically take five if they were to undertake their own separate placements across the industry, fast-tracking them to Chef De Partie within the Exclusive Kitchens after 24 months. Thirteen chefs are currently enrolled in the programme which launched in July 2014, including six from the Exclusive Hotels and Venues and seven from chef and catering colleges and universities across the UK.