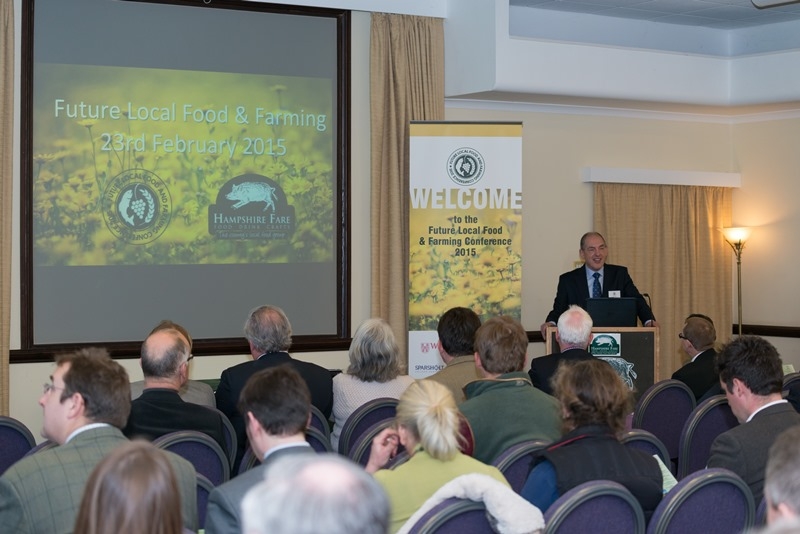 The conference was supported by Hampshire County Council and sponsored by Winchester City Council, and over 90 delegates registered to hear key speakers discussing the challenges and opportunities facing those operating in the rural economy, including farmers and local food and drink producers. It was followed by a delicious buffet lunch with food and drink provided by Hampshire Fare members.

Tracy Nash, Commercial Manager, Hampshire Fare, said: “We have been delighted that the conference has been so well received; it provided a much valued platform to tackle a few of the issues facing rural businesses while also offering inspirational case studies.”

Key speakers included CLA Senior Economist Dr Charles Trotman. He commented:  “There are many fantastic examples in Hampshire of creative and successful food and farming businesses which are creating new jobs and playing a significant role in the county’s wider economy. To maintain a thriving countryside economy, we need a political environment which enables and supports rural business growth, rather than stifling it. This conference has provided an important forum for rural businesses to examine some of the major challenges and opportunities we can expect in the future of food and farming.”

The conference tackled such subjects from the farmers’ and producers’ perspectives, including insight from Will Brock, a fourth generation farmer, on multi-skilling, legislation, and managing the uncontrollable. He spoke alongside Tim Jackson, Principal of Sparsholt College, who considered the need for increased levels of specialist and technical knowledge in order to achieve a competitive edge.

Martyn Pring, owner of The Rural Farm Shop Company and Researcher with the School of Tourism, Bournemouth University, was well placed to consider the opportunities offered by the burgeoning leisure and tourism markets. He described the rejection of’ MacDonaldization’, the establishment of the staycation, and the expectations of a new generation of tourist looking for food and drink experiences to enrich their holidays.

However he called for more joined up thinking to build and package the experience factor and to ensure that local and regional foods are considered part of the broader experience economy, and linked to culture, heritage and wellbeing. He suggested that attention needs to be focused around the development of special interest food tourism products such as cookery schools and food courses.

Three Hampshire Fare producers offered business advice and inspiration including Simon Robinson of Hattingley Valley, one of the most environmentally-friendly wineries in the UK and already among the top 20 largest UK sparkling wine producers, William Buckley of Bossington Estate, who explained his mantra ‘pasture to plate’ in using his own grassfed cattle to establish Chalk Valley, an artisan burger dining experience. Finally Stacey Hedges recounted the development of the hugely successful Tunworth cheese brand which has helped to reshape perceptions of the English cheese market.

Feedback from the conference was very positive. John Milne, of Meon Hill Farms, said: “A big thank you to Hampshire Fare for today’s conference. It was very thought-provoking and interesting and the ‘fare’ provided for lunch was exceptional.”

David Gleave, Test Valley Borough Council, said; “Thank you for an interesting series of presentations and discussions and the opportunity to catch up with local experts. I was particularly interested to hear Williams Buckley’s passionate account of his extensive form of farming.”

Emma Wetherley of Grantham Farm Montessori, Tadley, commented: “I am from an educational background so I’ve come to learn about local food production and pass this on to the children and their parents, and I have learned lots of good things to take back. I particularly liked the Chalk Valley burger presentation – I can take that message about sustainable and healthy eating back to school.”

John Foskett of Hampshire County Council said: “I enjoyed it. It was very good and very interesting to hear all the different aspects. However I would have liked to have asked are we fighting a rearguard action to protect the rural economy rather than promoting it?”

Ganesh Selvarajah, Havant Borough Council, added: “It was really useful. The problem with the rural voice is that it has different messages rather than one cohesive message. However I do think more people need to understand the rural economy particularly as rural policies are often determined by those with an urban mindset - that is from a position where things such as digital connectivity and public transport are taken for granted.”

Simon Robinson from Hattingley Valley commented: “It was a very good session and I enjoyed the breadth of the speakers and different subjects."

He added:  “Hampshire is beginning to buzz with food and drink businesses and quite rightly so. People don’t go to Hampshire for a holiday and I don’t know why. Hampshire is a super county, but it hasn’t caught the public imagination and yet the countryside is second to none and we’re only 50 miles from London.”

Mike Wright, Chairman of Hampshire Fare, concluded: "What a great reaction from the audience! A strong line-up of speakers gave us all every confidence in Hampshire's rural businesses making a major contribution to the local economy. We look forward to establishing it as a regular, annual event.”