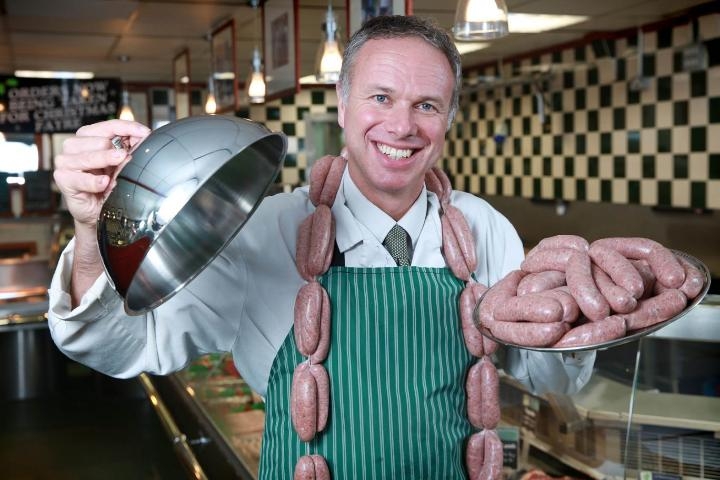 A butcher from Aldershot claims to have made the world’s most expensive sausage. Kevin Turner, from A Turner and Sons, has concocted a £37 sausage which includes Mangalitsa pork, truffles, Stilton cheese, powdered cep mushrooms and vintage 1947 port.

He has created it to mark British Sausage Week from 2 to 8 November. The porky treat would cost £700 per kilo.

Mr. Turner explained: “The average British sausage will cost you 35 pence each. These will be more than 100 times more expensive at £37 per sausage.

“The single bottle of port is £450, the Stilton was £250, the pork works out at £25 per kilo, the truffles at £70 and the cep mushrooms at about £50.”The superior sausage has been dubbed the 'Magnificent Mangalitsai', after the pig from which it is derived. Mangalitsa pork is known as the "Kobe beef of pork". The fat has been bred out of most pork pigs, but it has been found that this removes much of the taste. This variety of pork has "marbling" of fat, and a much richer taste.

It’s not the first time this Hampshire butchers has been in the limelight. After winning Golds at the Great Hampshire Sausage and Pie Competition, Kevin and his brother Paul were determined to find a way to go national with their sausages. In 2012 Paul appeared on the BBC’s Dragon’s Den and convinced Peter Jones to invest. The Alf Turner brand of sausages has since been born and is sold nationwide whilst raising money for Help for Heroes.

A Turner and Sons is located at 205 North Lane Aldershot. Why not swing by this week and pick up some award-winning sausages for British Sausage Week?