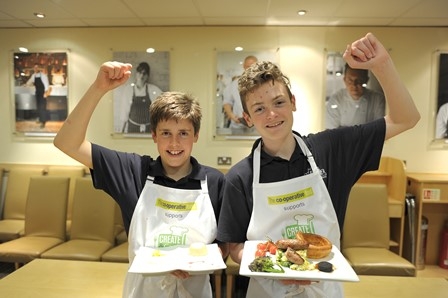 Eight teen cooks from Hampshire battled it out serving up a locally inspired two course meal in a bid to be crowned the ‘Hampshire Champion’ in the regional final of the Create & Cook Competition at South Downs College, Waterlooville on Monday.

Scott Newell, 13, and Ryan Bloxsom, 13, from Bay House School, Gosport won the judges over with their homemade goat sausages with goats cheese and thyme Yorkshire puddings, cherry tomatoes and purple sprouting broccoli which was followed by a duo of rhubarb and liquorice panna cottas.

After winning the Hampshire final, Scott said: “At school, we had a sausage making competition, where the local butcher picked the best two flavours to sell in his shop with all the profits going towards our school’s catering department. We decided to make goat sausages as it was something different and we could get the goat meat locally just five miles away in Titchfield.”

Ryan added: “When we were planning to enter The Create & Cook Competition, we knew that we had to use local ingredients. We decided to feature the goat sausages and I  decided to make a panna cotta with milk and cream from the local range at our Co-operative store. We’d only made it a few times when we were practicing for the competition, so I’m glad it worked today! It feels really amazing to have won and we’re really looking forward to cooking in the final in June.”

The Create & Cook Competition, which is run by fit2cook food education and sponsored by The Southern Co-operative, aims to nurture young talent and celebrate local food. The competition encourages students aged between 12 and 14 to create and cook a two course menu using as many Hampshire sourced ingredients as possible.

Min Raisman from fit2cook food education who runs the Create & Cook Competition said: "The winning dish used so many local flavours and the culinary skill involved was outstanding for 13 years olds. The homemade goat sausages were beautifully made and cooked. It was an extremely original dish".

Ellie Bristow and Izzy Waters, from Robert May’s School, Odiham, were close runners up in the Hampshire final after producing  a smoked trout and watercress roulade with new potatoes and tomato salad, accompanied by a elderflower panna cotta with gooseberry compote and tuile biscuits for dessert. Alfie Jolliffe and Shuzeda Chowdury from Brune Park School, Portsmouth, and Katie Nelson and Lilla Hardman, St Swithuns School, Winchester also competed in the Hampshire final.

The finalists of the Hampshire heat, Scott and Ryan, will go on to the Regional Final of The Create & Cook Competition on 21st June at Newlyns Cookery School in Hook, Hampshire. The finalists will cook against fellow winners from Sussex and the Isle of Wight schools, aiming to win the 2016 Create & Cook Competition trophy which is currently held by students at Christ the King College on the Isle of Wight.

To find out more about the Create & Cook Competition, please visit www.fit2cook.co.uk/createandcook.