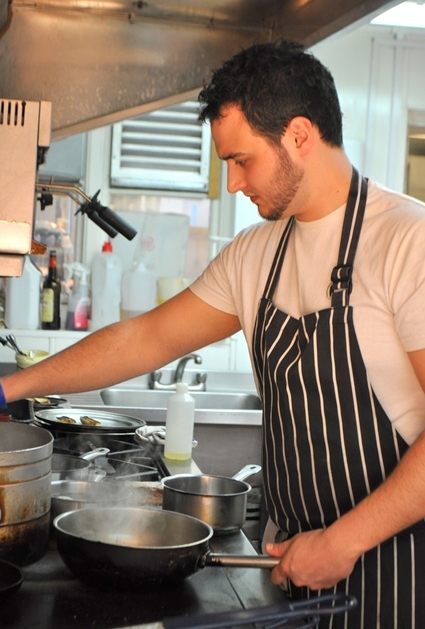 Meet Chris Barnes and Tom Wilson, Co-Head Chefs of The Crown, Old Basing, one of the UK’s top 50 pubs in Good Food Guide 2015.

Chris Barnes: Our aim at The Crown has always been to make it the sort of place that I would enjoy going to on my days off.

I am Basingstoke born and raised, and studied at the local catering college before undertaking a work placement at Cafe Roux in Amsterdam (Quite the eye opener!). After this I secured a job at Lainston House near Winchester, starting as Commis Chef and working my way up to Chef de Partie. Following this I worked at JSW in Petersfield before returning to Lainston House where I was promoted to Junior Sous Chef, and worked alongside Tom.
Tom and I worked together there for three years before deciding we would have a bash at our own thing, taking on the lease of The Crown with the support of our families.

Eating out has been a passion of mine since college, saving my money to eat out at some of the best restaurants around. One huge aspiration was to eat at Michel Bras in France. I had a serious car accident when I was 21, breaking both my legs on Christmas Eve driving home from work, and as part of my recovery a good friend booked the restaurant as a goal for me. I made it there and the experience was inspirational.

The best thing about my job is the sense of freedom: I put the things I want to cook and eat on the menu. Also I am lucky to be able to work closely with my father, fiancé (Fallon runs front of house), and best friend, Tom. It can't get much better than that!

The hardest thing is trying to please everybody! It’s a constant balancing act with people’s tastes ranging from locally sourced artisan products to curly fries.

Local food is a big influence for me. Andy Mackenzie at Lainston house was a massive help - his passion for all things local was infectious. Also Jake at JSW taught me the importance of cooking delicious food. It sounds simple, but many places sacrifice flavour for technique just for the sake of it. We don't have a signature dish, but we have a few things that represent our style such as venison pie, and rabbit and pork sausage that we make ourselves with smoked mash and red onion sauce.

Tom says: I live in Winchester but I am originally from Basingstoke. People who knew me as child probably can’t believe I’ve become a chef as I was not the most adventurous eater! Open days in the food departments at the local school and college made me aware of more interesting foods. Curiosity got the better of me and it turned out that I loved tasting new foods, and I have enjoyed discovering new ingredients and producing different foods ever since.

I trained at Basingstoke College of technology, then went to France on a work placement. This experience was invaluable; it gave me the opportunity to learn about different ingredients I had never used before, and I really gained a lot of confidence in myself and my cooking.  Returning from France, I started working at Lainston House Hotel where I learned my craft from some very talented chefs, as well as a great deal about kitchen dynamics and management.

I have known my Co-Head Chef, Chris for many years. We went to the same secondary school and did the same course at college - just one year apart.  We even worked at the same pub during college and he got me my first full-time job at Lainston House.
Having worked together for so many years, when the opportunity to start our own pub came up, it made sense to go for it. Taking over The Crown felt right as Old Basing is such a thriving and picturesque village and not far from Basingstoke town centre.
The best thing about my job is being able to experiment with amazing produce and create delicious plates of food for customers to enjoy. Getting great feedback makes the long and unsociable hours well worth it, and gives you a massive sense of achievement.

Every dish we produce is influenced by the best produce we can find. Our style has developed into recreating pub classics with our own take on them.

Both Chris and Tom agree: Our greatest achievements so far are being included in the Good Food Guide 2015 and being listed as one of the top 50 pubs in the UK, as well as being recommended in the Michelin Guide. We couldn’t be more proud of the team.