Success for Hampshire in Westminster 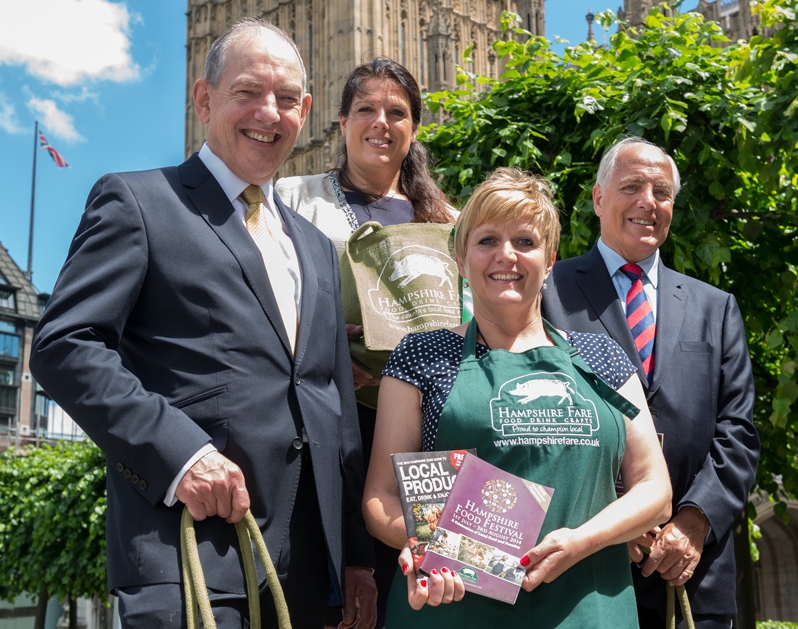 Hampshire wowed Westminster at a special Hampshire Day held in the Houses of Parliament on Tuesday, 10 June 2014.

Hampshire Fare and Hampshire producers did the county proud at a special Hampshire Day held in the Jubilee Room of the House of Commons.

It was the first such event for Hampshire, but comments made to the producers by the 300 plus MPs, assistants and researchers who attended indicated that it was considered the best event of its kind that they had visited.

It was initiated by Caroline Nokes, MP for Romsey and Southampton North, with the support of fellow MPs George Hollingbery, MP for the Meon Valley, and Damian Hinds, MP for East Hampshire, and organised by the county’s food group, Hampshire Fare.

Cllr Roy Perry, leader of Hampshire County Council, opened the event, toasting the occasion with a glass of Hattingley Valley sparkling wine, and welcomed everyone to a taste of Hampshire’s rich abundance of produce.

Andy Mackenzie of Lainston House, who is on the board of Hampshire Fare, greeted each visitor with: “Welcome to Hampshire!”

The selection of 15 producers and organisations who set up stall represented the breadth of the county. The range of produce included charcuterie, cheeses, chocolates, chutneys and jams, ice-creams, wine and beer. So many producers had wanted to attend that the room could have been filled four or five times over.

Caroline Nokes herself said: “It’s been brilliant, it has been busy all the time and we’ve seen nearly every Hampshire MP; all my colleagues all say that they’ve had a great time.”

This event was part of Hampshire Fare’s campaign to raise the profile of Hampshire at national level as a food-producing county and as a holiday destination.

Tracy Nash, commercial manager of Hampshire Fare, commented: “The day came together surprisingly well, but then there was an awful lot of planning in the lead up. I am immensely proud of how our Hampshire Fare members all worked together, there was a real sense of camaraderie.
“I feel as though we’ve really depicted our county well, and shown Hampshire to be a really beautiful, attractive place to visit.
“Everyone has been very enthusiastic about the event. One visitor commented that it was the best event of its kind at the House of Commons that she had ever attended.”
The producers were delighted, too. Alex Mezger of Judes Ice Cream said: “We thoroughly enjoyed ourselves. It felt like we didn't stop scooping all day and must have given out hundreds of mini cones! We're extremely grateful to Hampshire Fare for organising everything and making it a huge success.”

Jacob Leadley, winemaker with Hattingley Valley commented: “ It was a great day! We took an order from a visitor on the phone an hour after he tasted it.”

Lin of Belinda Clark Gourmet confectionery said: “The number of people who came through the doors was amazing!”

Lizzie Skinner of New Forest Chocolates agreed: “It was a tiring day, it was also a thoroughly enjoyable experience; interacting with people and receiving so many positive comments about both the event and the chocolate is very energising!”

Amy Nield of Laverstoke commented: “It was great to get the word out there about Laverstoke and the fantastic food Hampshire has to offer!”

Sarah Mills of Parsonage Farm and on the board of Hampshire Fare, said: “It was a privilege to be involved. I am sure it made a massive impression on those who visited, certainly by the time I checked my email on the coach on the way home I had already received an email from a senior researcher requesting to come to 'salami school', a brilliant result. I was also asked by numerous visitors where they could buy the salami and dried meats.”

Caroline Dinenage was one of the mps who attended. She commented: “It was fantastic to see so many of our local producers in Westminster – they did a great job of flying the flag for Hampshire and I know that MPs from across the country were thoroughly impressed with the outstanding businesses and quality produce on show.”

Steve Brine MP for Winchester visited all the stalls. He was already familiar with Judes Ice Cream, which started in Easton, where the MP lives, but is now based in Twyford; but he also discovered Hampshire Jams & Chutneys, another award-winning business based in a village on the outskirts of Winchester – a pleased Steve Brine tweeted: “Get in Hampshire!”