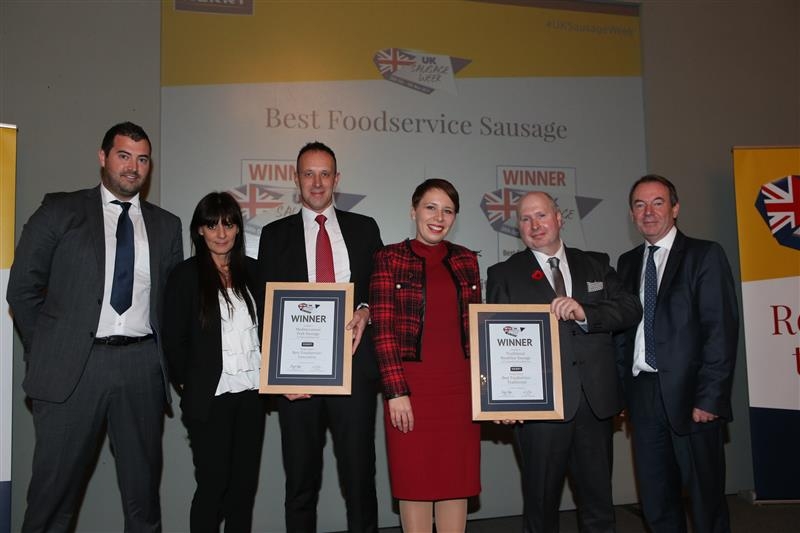 A Mediterranean Pork Sausage made by Solent Butchers Ltd has been given a national award to celebrate UK Sausage Week. The banger won in the Foodservice: Innovative category and Solent Butchers received its trophy from antiques expert, TV presenter and UK Sausage Ambassador Eric Knowles at a special celebratory lunch at Plaisterers Hall in London to launch UK Sausage Week 2017.

Mark Cristofoli of Solent Butchers Limited said: “Solent Butchers is very proud to have won the Best Foodservice – Innovative Category in this year’s competition with our Mediterranean Pork Sausage. Developed with the help of Unbar Rothon, our Seasoning Supply Partner of nearly ten years, this sausage is bursting with no less than seventeen hot, pulsating spices from 18 different countries. They are complemented with rich garlic and onion flavours which deliver aromatic herb top notes, all rounded off with tomatoes and bell peppers.”

Eric Knowles said he was delighted to be involved with UK Sausage Week: “People often say to me, ‘I don’t know much about art but I know what I like!’ The same could be said about me and sausages. I wouldn’t claim to be a sausage expert but I certainly know a good one when I’m eating it.”

The search to find the best UK sausages set off with sizzling success when over 400 different bangers arrived at The Regional Food Academy at Harper Adams University for two days of judging in the run up to UK Sausage Week. The sausages were assessed in their raw state and cooked by professional home economists, according to the maker’s instructions. They were then judged by some of the UK’s most experienced experts, including Ladies in Pigs, all under the watchful eye of head judge and UK Sausage Week’s supremo ‘Sausageologist’ Keith Fisher.