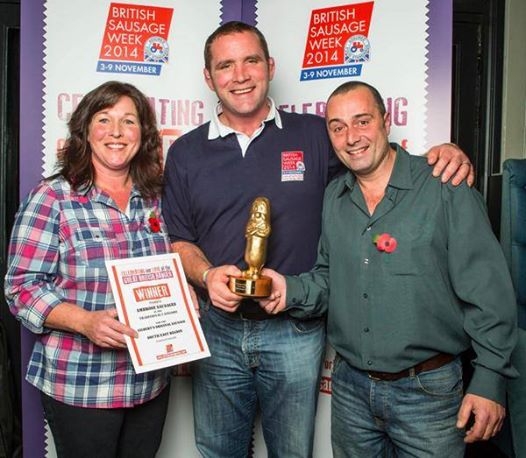 “It is days like this that make it all worthwhile,” commented Sue and Philip Ambrose when they won the South-East Region Award in the Great British Banger competition for their Gilbert’s Original Sausage. The century-old secret recipe was created by Philip’s granddad and wowed celebrity judge Phil Vickery at the cook-off event in Reading.

Gilbert’s Original Sausage, produced by Eastleigh-based Ambrose Sausages, is made using traditional artisan methods and free-range pork reared on their own farm in Upham - which often involves a 4am start for Sue and Philip. They established their own farm as they were determined to produce the very best flavoured free-range pork for their sausages.

Philip commented: “I’d like to dedicate this award to my grandparents as it is their recipe.

The competition was part of British Sausage Week, which is now in its 17th year and aims to raise awareness of the variety, quality and tastiness of British sausages.

Sausages are available at www.ambrosesausages.co.uk or one of Hampshire Farmers’ Markets.