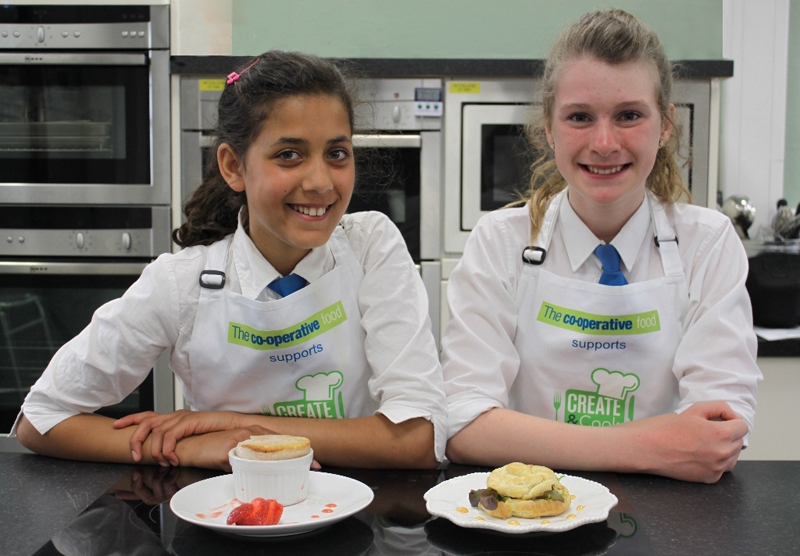 Pupils Rosie Foot and Moza Ackroyd from Ryde Academy have been crowned Isle of Wight's 2013 Create and Cook Competition champions for their winning locally inspired menu.

This new competition for 12-14 year old from Isle of Wight schools is run by fit2cook food education. Sponsored by The Southern Co-operative, it aims to nurture young talent and celebrate local food. The winning duo, both aged 13, fought off stiff competition from three other teams in the finals, held on 8 May at the Cookery School, Isle of Wight College: Josie and Abigail from Carisbrooke College, Colby and Peter from Sandown Bay Academy plus Aimee and Courtney also from Sandown Bay Academy.

Rosie and Moza's two course menu of Bembridge crab choux puffs with homemade mayonnaise followed by strawberry souffl? has won them a place in the regional final of the 2013 Create & Cook Competition. Being held at Newlyns Cookery School in Hampshire on 26 June, Rosie and Moza will cook their Isle of Wight menu in competition with county finalists from Hampshire and West Sussex schools. If they are crowned overall 2013 Create & Cook Competition winners, Rosie and Moza will claim £1000 for their school food technology department.

Isle of Wight High Sheriff Mary Case, who was a competition judge and proud to be backing the Isle of Wight finalists, said: 'All the teams showed great skill and enthusiasm in their use of local ingredients. Really good luck to Rosie and Moza in the final cook offs on the mainland.' Fellow judge Oliver Stephens from Priory Bay Hotel was impressed with the standard of cooking at the Isle of Wight final: 'Rosie and Moza's winning dishes had great technical ability and a real purity of flavour.' Oliver has supported the competition from the start, saying: 'It's a great initiative that has got young cooks in schools involved in thinking about local ingredients and combining them in everyday cooking.' The competition was also judged by The Southern Co-operative's Retail Business Manager at Cowes store, Nathaniel Dunkley.

The Create & Cook Competition challenges young cooks to think about sustainability and supporting local farmers. This is something the main sponsors, The Southern Co-operative are committed to with their Local Flavours Range stocked in Island stores. Competition organiser, Min Raisman of fit2cook food education said: 'A great amount of local produce was used in the young cooks menus - Bembridge crab, Isle of Wight blue cheese, Garlic Farm garlic, Calbourne Water Mill flour and even some of the young cooks own eggs and home grown vegetables. It was a great experience for the young cooks to work in a professional kitchen under pressure and has been a great first year for the competition on the Island.' The Create and Cook Competition was also supported by the Cookery School at the Isle of Wight College, Priory Bay Hotel and Wightlink.