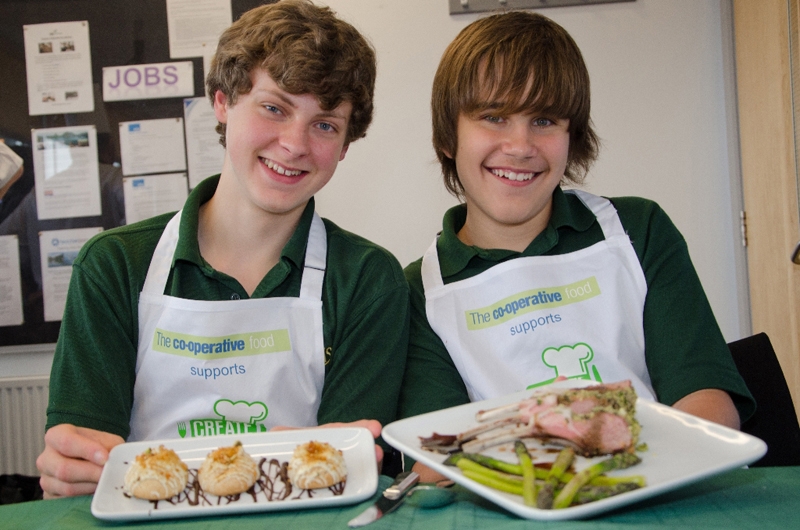 The Create & Cook Competition is run for 12-14 yr olds in schools across the South by fit2cook food education. Sponsored by The Southern Co-operative, it aims to nurture young talent and celebrate local food.

The winning duo, both aged 14, fought off stiff competition from three other schools in the Hampshire finals, held on 21st May in the catering kitchens at Highbury College, Portsmouth: John Hanson School in Andover, Kings' School in Winchester and Costello School in Basingstoke.

Dan and Chris' winning menu was a rack of herb crusted local lamb with potato and courgette rosti served with a cherry reduction sauce followed by profiteroles filled with gooseberry cream covered in white chocolate and pistachios.

They now go onto the regional final of the 2013 Create & Cook Competition which is being held at Newlyns Cookery School near Hook on 26 June. Here Dan and Chris will cook their Hampshire menu in competition with county finalists from West Sussex and the Isle of Wight schools. If they are crowned overall 2013 Create & Cook Competition winners, they will win £1000 for their school food technology department and the fit2cook trophy.

Min Raisman from fit2cook food education who runs the Competition

commented: 'Dan and Chris are very accomplished cooks. Their lamb dish was stunning with a sophisticated yet balanced mix of flavours. Their profiteroles would sit comfortably on any top local chefs menu. They certainly deserve their place in the regional final'

Runners up, who also win a place in the regional final, were Beth Wright and Naomi Colley from John Hanson School, Andover. Min said: 'Their menu of local pork, apple and sage burgers with homemade wedges and watercress salad plus a raspberry meringue roulade was beautifully presented and stuffed full of local flavours'.

James Durrant, chef and owner of The Plough at Longparish, who was on the judging team, was impressed with the standard of food the teenagers cooked:

'I found the day really inspiring, so much talent at a young age. It's really promising for our industry.'

The competition was also judged by The Southern Co-operative's Retail Business Manager at the Stockbridge Store, Claire Walls and co-founder of the competition, home economist Davina Tibbetts.

The Hampshire cooks had worked hard at using local ingredients and visited lots of farmers markets and farms to find ideas. Supporting local farmers is something the main sponsors, The Southern Co-operative are committed to with their Local Flavours Range stocked in key Hampshire stores.