Putting Local Produce on the Map 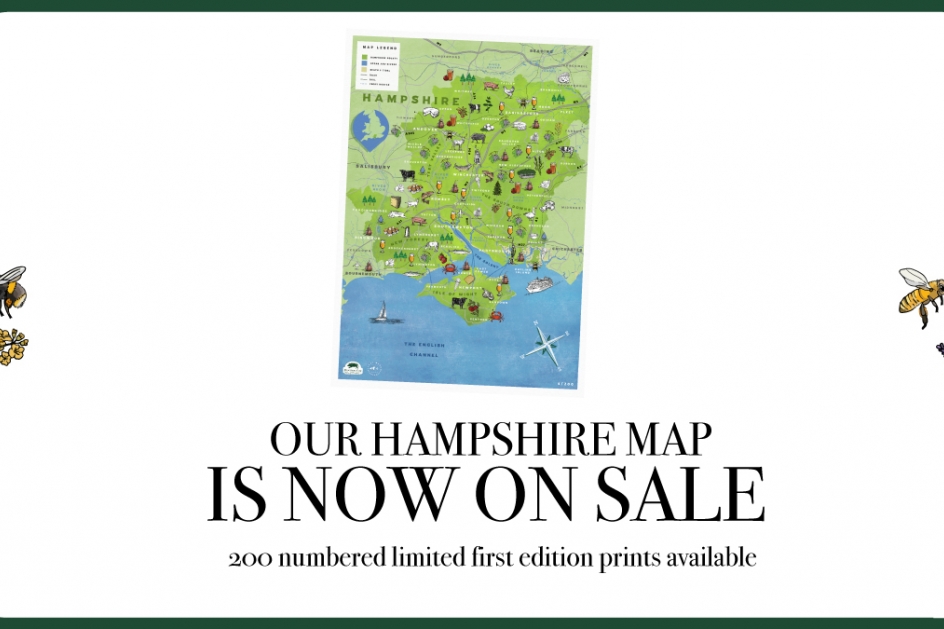 Following many requests, Hampshire Fare are making their bespoke artist-drawn map of Hampshire and the Isle of Wight’s local produce available as a gallery-quality art print.

As part of Hampshire Fare’s 30th Anniversary celebrations, the county food, drink and craft group commissioned a special artist drawn and illustrated map of Hampshire and the Isle of Wight with detailed icons showing the locations of producer members.

The map featured in this year’s special edition of the group’s  annual local produce guide - entitled ‘Discover Local Produce with Hampshire Fare’. The map has also been reproduced on boards to be used as part of the Hampshire Fare Roadshow – allowing Hampshire Fare to ‘pop-up’ around the region, promoting local produce as events and opportunities become available.

Following the Map being publicised alongside the launch of Hampshire Fare’s local produce guide, there has been a strong response from the general public, via social media channels, interested in buying copies of the Map.

Tracy Nash, Commercial Manager, Hampshire Fare, commented, “People have asked how they can buy copies of our Map, and we have responded! We are really pleased with the attention to detail that Thomas Moore of Lást Maps has undertaken in creating our beautiful Map. What we hadn’t anticipated was the response from so many of our followers. However, we know that people love food and drink, there has been a growing interest in local, and retro maps are certainly in vogue; put those ingredients together and you have our Map – a recipe for popularity!”

Thomas Moore, Lást Maps, added, “We are delighted to make Hampshire Fare’s Map available through our website. I have enjoyed designing a Map that celebrates Hampshire and the Isle of Wight and tells the story of the amazing produce waiting to be discovered on people’s doorsteps. It has been particularly exciting to hear that more and more people have been enquiring about the Map and are keen to have their own copies to take home. I think it will look great on people’s walls.”

A special version of the Hampshire Fare Map has been created for the general public; these are available on art print quality 300gsm paper in three sizes (A2, A3 and A4) as part of a limited edition print run of 200, and can be bought through Lást Maps website: lastmaps.com.