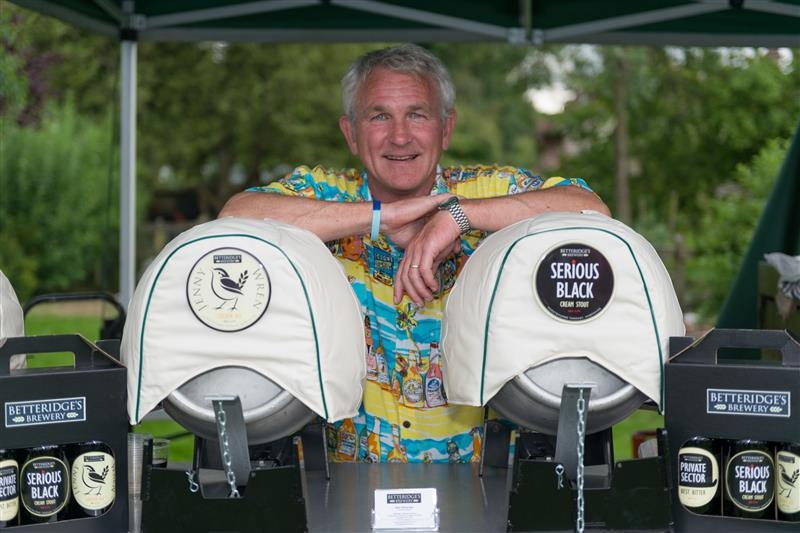 It is funny how little things influence your destiny, says brewer Mark Betteridge. Many local artisan producers pursue a passion nurtured for years. But not Mark – his decision to become a brewer was made in seconds.

Mark had joined the army aged 19 having attended the Royal Military Academy, Sandhurst, and was commissioned as a young officer into the Royal Regiment of Wales, 24th/41st foot: “As an Englishman, this had something to do with a love of rugby!”

After nine years Mark realised this was taking its toll on his bones and applied to become a helicopter pilot, receiving training and attaining his wings at Middle Wallop.

“I flew for three years before transferring to the Army Air Corps where I spent my remaining 37 years of service with the Corps before retiring in March 2012.

“Prior to retirement, great retraining opportunities for resettlement into civilian life are offered: project management, risk management, health and safety and accountancy were all part of the plan.  Disillusioned, however, with the realities of attaining employment in the middle of a recession at a senior management level, I decided to look at self-employment.

“Bureaucracy, political correctness, micromanagement and budget restriction were all making things difficult for me and I decided to attend a self-employment workshop. On the way to this course at Tidworth, 30 minutes down the road, I realised I would be asked what my chosen self-employment was to be and I decided to be a micro-brewer – yes, in my car on the way to the course!

“Everything I did on the course I applied to the brewing trade. Returning home to inform my wife, I launched into the idea with enthusiasm. I knew I could do it. After all, at that time 1100 other people were!  I bought books and read them all. I secured practical placements with friendly breweries: Keystone Brewery in Tisbury, Ballard’s Brewery in Rogate, and The Rebel Brewing Company in Penryn. Then I embarked on the most fantastic course at Brewlab where I attained certification as a brewer; I felt prepared.  Concurrently I had embarked on a major project. Having just lost at auction a local building I’d intended to use as the brewery, I decided to brew in my barn, 25 yards from my back door. I was off.

“What have I learned? Give and you will receive, involve everyone who is local and keep people interested. They are your customers, and although I sometimes think I am my own boss, actually, the customer is my boss.

“I once set up Investors in People for 16 Air Mobile Brigade in Colchester. At the presentation of the award, I heard one of the most meaningful sayings for anyone in any form of business: ‘Tell me and I will forget, show me and I might remember, involve me and I will care.’  I still stick to this.”

The upsides? “Brewing from home has cut fuel costs, reduced the stress of commuting, reduced overheads and helped to reduce traffic on the Hurstbourne Tarrant roads due to local deliveries in small quantities, and helped to keep local cash circulating in the local economy. Surely this is how things used to be done? Hurstbourne Tarrant used to have at least five breweries and as many maltings… We are just re-learning forgotten values and lessons. As for drinking and driving – we now have a pub and a brewery in the village.

“As for downsides, there’s only one: the assumption that I am at home doing absolutely nothing. To any subscribers to this view – please come and empty my mash tun, stack the casks and do some bottling!

“Most brewers will be lured by the prospects of owning pubs, large sales and a regional presence. This is not my vision. I started at 56 and I am not getting any younger. I enjoy retirement (brewing). Although hard work, it keeps me fit and my mind agile. In addition, I like the community feel and doing something for the locality. I am lucky to have the barn in which to brew, but it is a lifestyle choice, it will never make me rich, but it makes me very happy to be involved in a friendly supportive profession, to keep in touch with local people, and to make small amounts of good real ale for sale locally.

“If you are in the northern Test Valley or passing through any of the villages close to Hurstbourne Tarrant, look out for free house pubs, ask for my ales and try them for yourself. The George and Dragon only sells my beer, and it is the guest ale regularly at the George at Vernham Dean and The Red House in Highclere among others.”