Pigs did fly at the Alresford Show 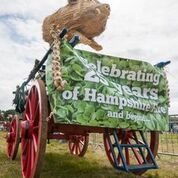 This year’s Alresford Show saw a giant pig take to the arena as part of Hampshire Fare’s 25th anniversary celebrations!

The hog featured in the local food group’s logo was brought to life by the talented residents and workshop participants of The Lantern Community near Ringwood. Constructed from papier mache and straw the giant pig was mounted on a tall stick and displayed on a traditional cart along with a selection of local produce. Our thanks go out particularly to Nessa from Bushfield Farm whose expert driving skills secured a fabulous horse drawn display of local produce including Long Barn Alresford's  dried lavender bunches, the Watercress company for supplying crates of watercress, The Garlic Farm for supplying wreaths of garlic  and Hill Farm Juice for supplying Hampshire grown apples. All produce was displayed around 'Justin' our handcrafted Hampshire Fare hog.

The cart was pulled around the main arena by two horses from Bushfield Farm near Winchester driven by Nessa the farm and farm shop owner. The eye-catching hog appeared to fly around the showground in celebration of Hampshire Fare’s 25 years.

The hog was joined at the show by plenty of Hampshire producers selling their delicious food and drink to the crowds.

The Lantern Community creates life-enhancing opportunities for adults with learning disabilities. The hog project was a creative opportunity for the residents and workshop participants. The hog was named Justin by the community and will hopefully make an appearance at more anniversary celebrations during the year.