Pasta Chef of the Year 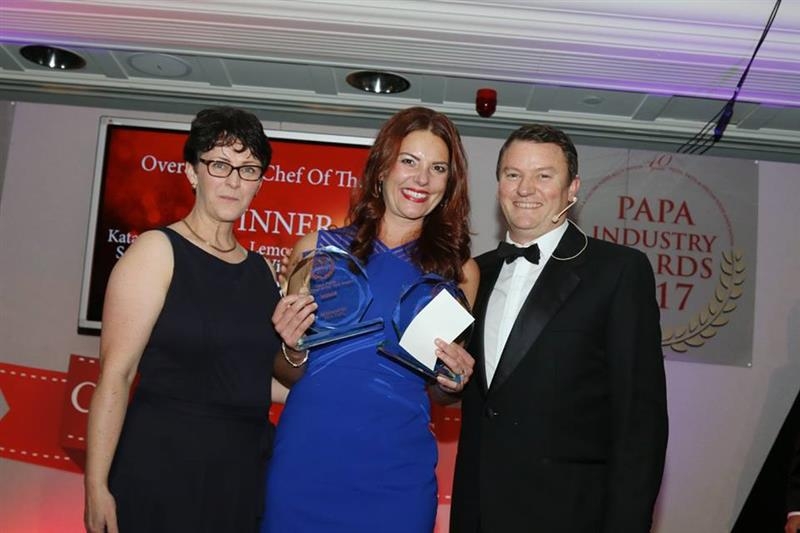 Southampton-based Cookery School owner Katarina Broadribb from The Lemon and Soul Cookery School has won a prestigious PAPA Award recognising her as Pasta Chef of the Year 2017.

Katarina picked up the award at The PAPA Awards Gala Dinner which took place at the Royal Lancaster London Hotel in November. Hosted by Comedian Dominic Holland and Celebrity Chef, Theo Randall the Awards recognised excellence and innovation in the important pizza, pasta and Italian food industry in the UK and Katarina was a worthy winner of The Pasta Chef of the Year title.

The PAPA Awards, judged by panels of professionals from the industry, highlighted those involved in the sector who are pioneering and leading the market, whether in the development of new products or the creation of excellence in the high street. Katarina wowed the judges with her Brisket and Wild Mushroom Ragu Pappardelle which the judges described as “just perfect”.

Katarina is the owner of Hampshire based Lemon & Soul Cookery school. Katarina has been cooking since a small girl in her home town of Bratislava and after years of cooking for family and friends she bravely decided to make it her business. She has since successfully launched several classes in Southampton and has recently won the Café Life Awards with her Croll of the New York Style Bagel Company in the UK 2017, her daughter has won the World Bread Awards twice and her middle daughter has been in the finals over the last three years.

Katarina commented: “This competition is a fantastic way of inspiring new ideas. I am absolutely delighted to be named Pasta Chef of the Year. I feel like I am dreaming. It is such an honour to win such a big award and I feel very proud. I am so passionate about food and to be recognised by PAPA as The Pasta Chef of the Year is the most incredible achievement.”

Samantha Day from the competition organisers, PAPA said: “The quest to find the country’s best pasta chef takes us on an amazing journey across the UK. Katarina was a clear winner and the judges were really impressed with the flavours in her pasta dish, making her a clear winner as The Pasta Chef of the Year 2017. Katarina has a huge passion for food and this is evident in her dish created for the competition.”