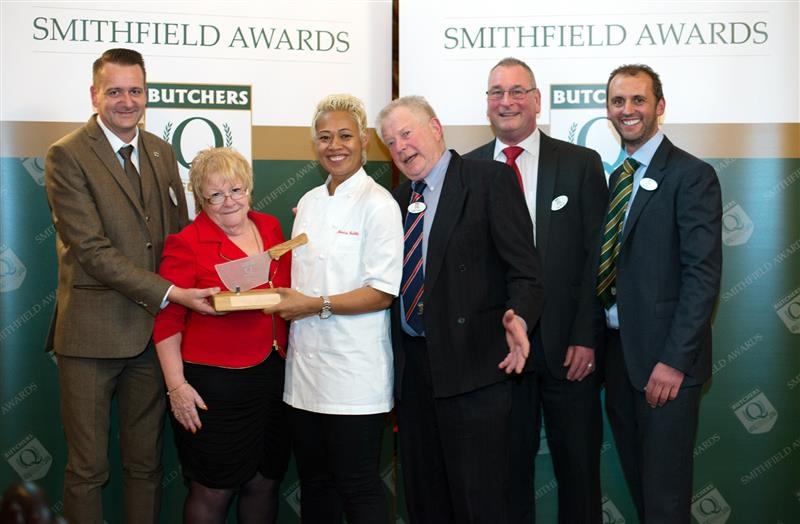 Staff at Owton’s, based at Chalcroft Farm, West End, are busy celebrating after being crowned 2015 Butchers Q Guild Smithfield Awards supreme champions. It is the highest honour a Q Butcher can achieve in the annual product evaluation event, open to the Guild’s 110 members nationwide.

The Smithfield Awards, the 29th year they have been staged, were open to all Q Guild members UK-wide and this year attracted a record entry of 472 individual products across nine categories from 56 Q butchers – more than half the national membership. The 2015 Smithfield Awards were sponsored by the Agriculture and Horticulture Development Board (AHDB), which supports the English beef, lamb and pig meat sectors, Hybu Cig Cymru - Meat Promotion Wales (HCC), Lucas Ingredients, Dalziel, The Scobie & Junor Group, Comark A Fluke Co, Hawk Systems, MRC and Innovative Food Ingredients.

Owton's, run by husband and wife Rob and Gill Owton, clinched the supreme accolade with its Mrs Owton’s Dry Cured Green Streaky Bacon, which had earlier picked up a coveted diamond award as the best product in the bacon and cured products category. Marked a perfect 100 out of 100, it was also chosen as Best English Bacon product. The dry cured bacon is a new product which has tasted success already this year, awarded a 2 Star Great Taste Award and a Gold in the Great Hampshire Sausage & Pie Competition last month.

Gill Owton has worked with the shop’s butchers to perfect their own dry cured bacon. She said: “It’s incredible to win. My dad was a butcher and at about six or seven years old I used to watch him curing bacon and it was just fascinating. About five or six years ago I said, let’s do that here. We work hard to give the customers what they want. They know they can trust us.”

General manager John Harding said: “It’s taken a while to perfect but I think we’re getting there. We’ve seen massive growth over the last five years – it’s amazing. This is the pinnacle. We’ve worked hard for this for a long time. We also believe in selling at the right price – we’re not a high priced butchers.”

The Owton family have been farming on the 225-acre Chalcroft Farm for over 600 years, first establishing a wholesale butchery business there in 1976, before launching their own retail farm shop and traditional family butchers in the early 1980s. In the mid-1980s, two of Rob and Gill’s three sons, Billy and Simon, joined the business and now look after the original wholesale arm. The multi award-winning farm shop is run by general manager Mr Harding, who originally trained as a chef and came on board after a 13-year career in the meat trade.

In April 2011, Owton’s opened a second retail outlet in the picturesque setting of Kimbridge, near Romsey, a third outlet comprising a butchery and delicatessen with more than 70 varieties of cheese was opened at Garsons Garden Centre in Titchfield, near Fareham. A most recently a fourth site has opened at a new retail development at Country Market in Bordon.

Owton’s won four golds in total, the others awarded to its Pork & Leek Sausage, Dry Cured Green Back Bacon and Black Pudding. The pork and leek sausages are a long standing favourite at Owton’s and are made in the dedicated sausage room by Rob Owton and his team, using local pork when possible.

All were judged by independent panels of food and meat industry experts. The measure of quality was indicated when nine products received top-rated diamond awards, 221 products clinched gold - representing 51% of the total entry - while 113 silver and 72 bronze awards were also handed out. Trophies and certificates were presented by Monica Galetti, one of the best-known female chefs in London and presenter and judge on BBC2’s MasterChef: The Professionals, at a ceremony at Ironmongers Hall, London. (Thus, Nov 19)

She told the gathered butchers: “I would like to thank the Q Guild for having me as a guest here – what an honour. In the industry I’m in, I have a lot to do with you and what you do. What I’ve witnessed here is the passion and the drive for what you do. What you do is important for the future – to protect what you do. These awards attract the younger generation into the industry and that’s what we need. I believe we need to support you as restaurateurs. My restaurant will be open this time next year, touch wood – please, give me your business cards! I will be looking for butchers.”

Q Guild national chairman, Alnwick butcher Mark Turnbull, said: “The Smithfield Awards remain one of the most demanding and stringent product evaluation tests in the land and the esteem in which they are held is clearly demonstrated by the fact that this year has seen record entries from a record number of businesses.

“All products need to be at the very top of their game to stand a chance of success and nothing says ‘we’re the best’ like winning a Smithfield Award. They remain among the meat industry’s most esteemed accolades, not only motivating recipients to introduce even more successful products, but also providing ideas and inspiration to fellow Q Guild members across the nation.”