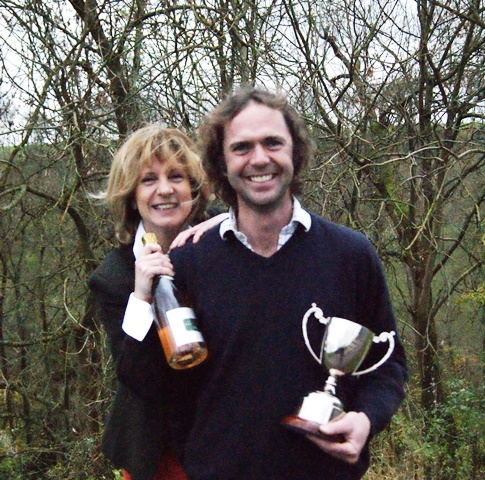 After just six months on the market, the luscious pale pink Exton Park Rose NV sparkling wine has won the Gold Medal and overall trophy for the best wine in the WVA Wine of the Year competiton, announced during the first week of December.

It was a unanimous vote from the judging panel, which included Masters of Wine Susie Barry and Peter Richards, organisers of the Wine Festival Winchester,  wine writer Sally Easton also a Master of Wine, and buyer Sara Bangert from the General Wine Company.  They commented: ‘Juicy, tangy, and focussed – well made with strawberry & cranberry fruit.  Lovely stuff – and commercial’ too’

Exton Park is the ’new kid on the block’ on the English sparkling wine scene , having launched its first three award-winning non-vintage wines in May.  The 55 acre vineyard, planted carefully over ten years with Pinot Noir, Meunier and Chardonnay, lies south east of Winchester, on the chalk slopes of the South Downs National Park, overlooking the Meon Valley.

On coming ‘top of the class’ and winning such a prestigious award, wine maker Corinne Seely said: ‘This is very special to us, because we have been judged by our peers in the region. It is amazing to win the Gold in our first year, and I am very proud of the whole team at Exton Park who have worked hard from vineyard to winery to produce this exceptional Rose - with its unusual and very slow pressing.  We are delighted to be honoured in this way’

If you fancy a taste of award-winning Hampshire wines then head to Fairy Lights and Fizz on 10th December at Cottonworth Vineyard near Andover where 7 local vineyards will be coming together. Find out more.