Meet the Producer: Pork Pie in the Sky 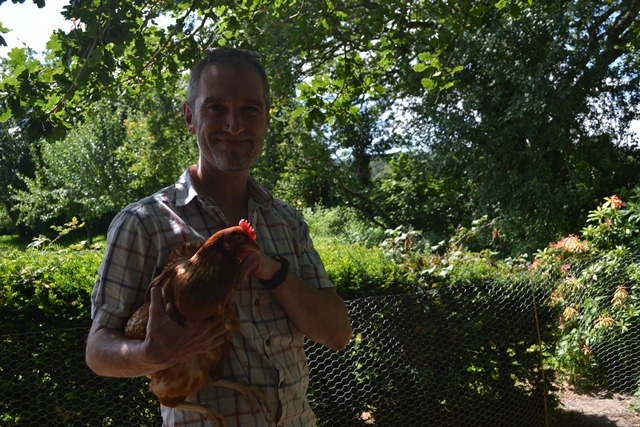 It started out as a hobby. As businesses often do. But Jon Kaye’s hobby was rather unusual: making pork pies.“I started making pork pies about five or six years ago. Then the Christmas before last I made some pies which were more amazing than usual, and family and friends said ‘You’ve got to sell these!’ I had always been interested in food, so much so that I had been thinking for some time of working in food, perhaps in press and publicity, but not as a producer.”

At the time Jon was working for book publishers in Chichester having been a trade journalist for some 25 years. Jon tested his pies out on colleagues at work, initiating a regular ‘Pork Pie Friday’ in the office. Then in April last year he set up his business, Jake’s Artisan Foods, making hand-cut, handmade pork pies (Jake Hampshire is the business’s avatar – a name based on Jon’s own initials and the county, of course). He joined Hampshire Fare, signed up to Hampshire Farmers’ Markets and started targeting pubs in the Petersfield area, close to home.

It was meant to be part-time, but six months later, in November, Jon realised: “ I found myself with two full time jobs and decided I knew which I would rather be doing.”

We met on a summer’s day in the garden of his new home, an old cottage just outside Petersfield, where Jon and his family have an idyllic rural lifestyle with hens in the garden and a visiting peacock, they’ve named Sid.

Jon bought the property because it has sufficient outbuilding space to convert into a bakery for his business.  It has become that serious that quickly. Every day he can be found either making pies or prepping meat (shoulder of pork all sourced locally). He is already investigating the possibility of taking someone on through the apprenticeship programme.

About his business growth, Jon explains: “I joined Hampshire Fare as soon as I set up the business as it provided the support and networking opportunities I needed. I’ve been involved with a few trade bodies in my life and this is by far the most useful; it is worth every penny. The leads are invaluable.

“James Durrant [chef/patron of The Plough, Longparish, Great British Menu winner, and another Hampshire Fare member] called me a few weeks back with regard to stocking my pork pies on his bar menu which is fantastic. That’s the sort of thing Hampshire Fare brings to the table.

“There has been a snowballing of opportunities… the more things you do, the more seems to happen. I wasn’t in a position to do anything on my own for the Hampshire Food Festival, but I said I’d love to be involved in events.”

And he has, attending the evening of local food and shopping event at Pinglestone Barn, Taste of Hampshire Food Festival at Sparsholt College and the Vineyards of Hampshire Wine Festival among others.

Looking ahead there is huge potential for his hand-cut pork pies as a premium brand. They’re the perfect summer bite to enjoy with a glass of chilled wine, or a local ale. As the name spreads, they are being stocked in some of the best venues in Hampshire including the Old Vine in Winchester, where they are shifting quickly at lunchtime.

Jon reports that even initially cynical midlanders [traditionally the home of the pork pie] have been impressed by the quality and taste. But as Jon points out, Hampshire is becoming recognised as a source of quality food: “This is an amazing county. There’s no need to go over the Channel for great food…. And this is a great pork pie that can be associated with fine snacking, if not fine dining!”