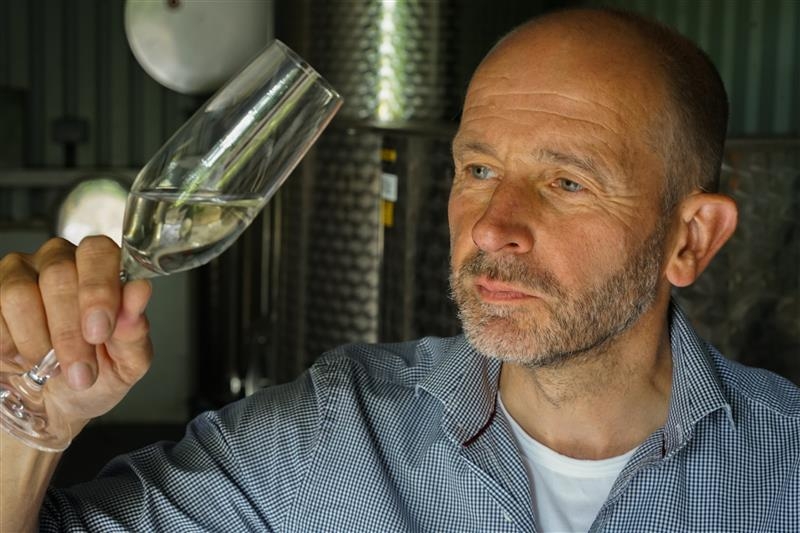 Chalkdown Cider is not your typical cider. Launched in 2016 it is best served chilled in a flute glass making an interesting alternative to a sparkling wine. Peter Richards, Master of Wine describes it as “….beautifully graceful and fine, almost balletic in its lightness and harmony.  It’s elegantly dry.”

We meet the man behind this fascinating new product, Piotr Nahajski.

When did you begin your research into making a Champagne style cider?

I’ve been working on Chalkdown Cider since 2012. The idea was born when I was on a study tour of Champagne as part of a degree course in Wine Production. Everywhere we went we heard the same story:  Champagne is a product of the best fruit, carefully pressed and fermented and then left to mature on its lees in the bottle.  It’s a process that can’t be rushed.  I was inspired.  The thought came to me that perhaps it would be possible to do the same with English apples:  top quality fruit; produced in the same way as Champagne and given long lees ageing.

Has it taken a long time to get the cider right?

I did as much reading into the subject as I could; spoke with suppliers in the UK and France; attended trade shows and did a stint as a judge at the Effervescents du Monde competition for sparkling wines. My first press was in 2013 – and we released that cider for sale in 2016.  I think I can say that I am quite pleased with the finished product.  The balance of acidity is about right and it has nice fresh and baked apple flavours, combined with a biscuity character.

Where do you source your apples from for the cider?

The apples we use are grown for us by Will Dobson at Hill Farm in Swanmore.  I think that it really adds to the personality of the cider to know that the fruit is locally grown.  I’m proud to say that Chalkdown is crafted in Hampshire.  I also believe that consumers are increasingly interested in products that are local and that reflect where they come from.

How is the cider best enjoyed?

Chalkdown is best served chilled in a flute glass. It makes an excellent aperitif – either on its own or with a drop of blackberry liqueur (a bit like a Kir Royal but with the flavours of apple and blackberry).  It also goes well with foods – particularly some of the excellent Hampshire cheeses and cured meats.  These would be well matched as starter for an informal dinner or a smart picnic.  Another thing that people are have spoken to me about is the idea of something really unique and local when it comes to a drink at a wedding; Chalkdown would be perfect there too.

The bottles are beautifully designed, what is the significance of the butterfly on the label?

The butterfly on the label is the Chalkhill Blue.  It’s a beautiful and even iconic butterfly that can be found in the Downs in Hampshire and Sussex.  We chose it for its association with the South Downs and hoped that it would reflect a sense of where the apples and cider come from.

How has being a part of Hampshire Fare helped your business so far?

I’ve only recently joined Hampshire Fare, but I can honestly say that I’ve been bowled over by the support and help they’ve given me already.  The team, led by Tracy Nash, are incredibly energetic and positive, and terrifically professional.  They’ve barely finished one event or initiative before they’re starting on another one. In my short time as a member they’ve made a few introductions that have already led to significant orders. They have skills – especially in marketing that fill gaps in my own skillset.  And they are really lovely, friendly, warm people.  I’d encourage any local food producer or retailer who isn’t already a member to get in touch with them.

Watch an interview with Piotr here.