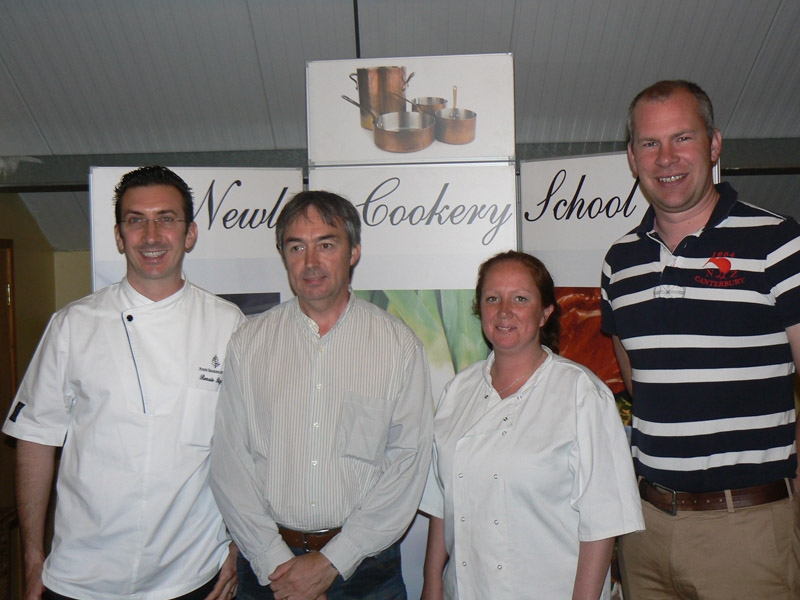 Watched by judges including Hampshire Fare Vice Chairman, Andy Lazenby and Hannah Westcott, Head Teacher at Newlyns Cookery School and Renato Rizzi, Executive Sous Chef at the Four Seasons Hotel, Dogmersfield, the competitors strived for three hours to impress the judges at the final at the Newlyns Cookery School in North Warnborough.

The winner's inspiring recipes for the final included a first course of open ravioli with oak smoked brown trout and Hampshire crayfish with a prawn and samphire bisque. The main course was Hampshire pigeon breast on a potato and watercress cake with Hampshire morels and a sauce made from wild Hampshire mushrooms. The competition rules stipulated that contestants must use at least two local Hampshire ingredients and Jonathan wowed the judges by telling them how he trapped his own crayfish, caught the trout in a local Hampshire river and foraged for the mushrooms and morels.

Jonathan, from Fleet, manages his own air conditioning inspection company and also works three days a week for the Fleet based mental health charity 'Minding the Garden'. Jonathan, 48, said 'I like to be a hunter and gatherer when it comes to sourcing food for my recipes. I like to fish for trout and I have been trapping crayfish for two years. I also grow my own vegetables and have been foraging for mushrooms for the past five years. I get a kick out of putting a meal together knowing that I have actually caught or grown most of the main ingredients. Winning the Newlyns Hampshire Amateur Chef competition has amazed me, I just couldn't believe that I had won this event. My wife will be really delighted that I have won a stay for us at the Four Seasons Hotel in Dogmersfield.'

This weekend, the farm shop also ran the Newlyns Hampshire Food Festival and over three thousand keen foodies from all over the county came to enjoy the stalls selling local cheeses, chutneys, ice cream and local beers from the Andwell brewery. Children had a chance to create and bake their own pizzas and customers enjoyed cookery and barbecue demonstrations, sheep shearing and tractor and trailer rides around the farm.

The Newlyns Hampshire Amateur Chef 2013 competition was open to anyone over the age of 18 who lived in the county, with judges requesting that they use at least two local ingredients in each course. The essence of the Newlyns Cookery School is to teach techniques, recipes and skills to make the most of local, seasonal ingredients. The school is owned and run by the Janaway family, a fourth generation farming family in North Warnborough who produce award-winning fully traceable, farm produced meat sold at their Newlyns farm shops.

'The standard of the recipes entered for the competition were extremely high, and we picked four really interesting recipes again for this year's final ', said Hannah Westcott, Head Teacher, of the Newlyns Cookery School. 'Jonathan's winning dishes showed great skill and used an incredible array of Hampshire's finest ingredients, many of which he caught, trapped or foraged himself. We would like to say a big thank you to everyone that took the time and effort to enter our competition this year, we couldn't make it the successful event it is without their passion and dedication'.