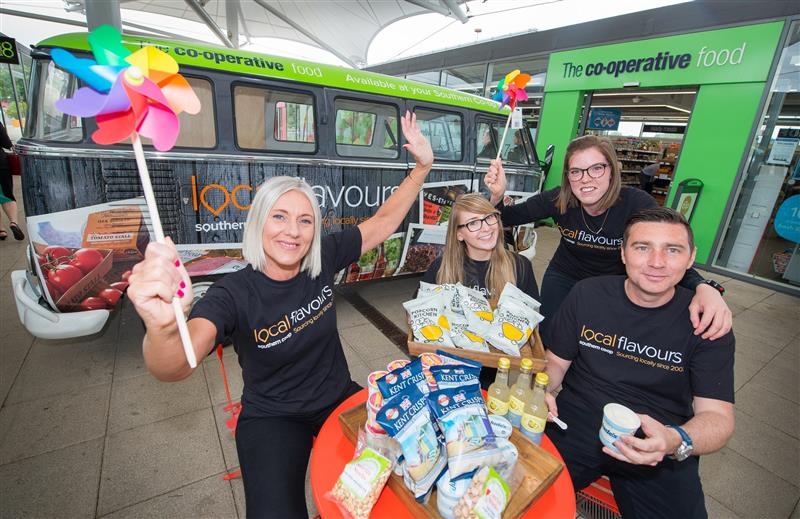 Celebrating ten years of supporting local food and drink producers, the Southern Co-op’s Local Flavours 10 Years Roadshow arrives in Hayling Island to give out free tastings of Hampshire food hero Jude’s Ice Cream to the public. Their #Local Flavours VW camper van is touring ten counties across the southern counties this month to encourage people to support their local food and drink producers.

In a ‘spot the #LocalFlavours camper van competition’, Southern Co-op is giving away some unique local foodie experiences as prizes to people who post the best pictures of the van on its journey across the region on Twitter or Facebook with the hashtag #LocalFlavours.

Alex Mezger from Jude’s Ice Cream said: “We’ve had the pleasure of supplying Southern Co-op for a number of years and have enjoyed seeing our sales grow in our local stores. Southern Co-op has supported us from our launch into our first store and now stock a wide range of flavours in their Hampshire stores.”

The camper started the Local Flavours Roadshow in Kent on Saturday 10 June, followed by Reigate on 13 June, Windsor on 15 June and Southbourne on Tuesday 20 June. After Hayling Island the tour continues onto Freshwater on the Isle of Wight on 24 June with The Tomato Stall.

“We are one of the very few major retailers who run our local sourcing as a separate entity within our business, which enables us to develop and retain very close relationships with our suppliers and to offer our customers a fabulous range of local food and drink, produced by people who are very passionate about what they do,” said Kate Hibbert, Southern Co-op Local Sourcing Manager.

“We are very proud to have done this for ten years and our #LocalFlavours campaign aims to encourage people living in the ten counties across the South to support their local producers. We are also offering discounts on local food and drink in our stores during the campaign so that people can try new things.”

Southern Co-op’s Local Flavours range was first introduced in 2007 on the Isle of Wight and supports farmers and producers, bringing the best local food and drink from across southern England to their stores.

Community support is fundamental to the business ethos of Southern Co-op. This includes working with an increasing number of local food and drink producers who supply the ‘Local Flavours’ range in selected stores.

Southern Co-op organises outings for their members to visit suppliers of the Local Flavours range to give an insight into local food production and the company’s support for local food producers.

Continued Kate Hibbert, “As an independent regional retailer in southern England, it’s vital that we play a pivotal role in supporting local food producers and the rural economy; this is very much part of our business ethics as a co-operative.”