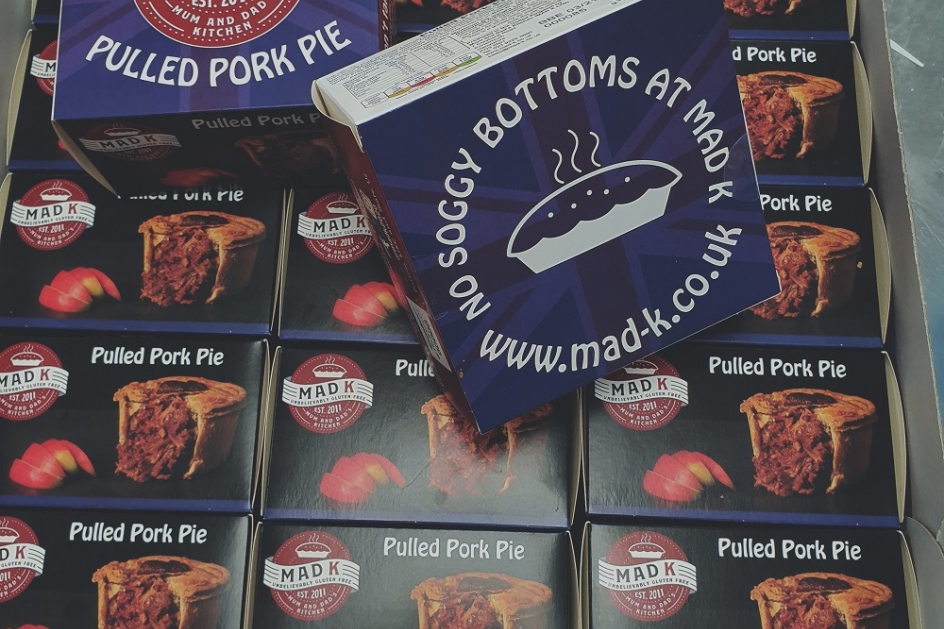 You probably haven’t heard of MAD K. That’s despite Jay Rayner (The Observer’s restaurant critic) praising their deep golden crusted pies when he reviewed Winchester’s Piecaramba. He remarked: ”Had I not been told, I would not have known the pastry was gluten-free. It crumbled in all the right places.”

MAD K are champion pie-makers with too many awards to list. Their most recent accolades include Champion Cold Eating Pie (egg, bacon and chorizo pie) in the Great Hampshire Sausage & Pie Competition 2020 and Class Champion (goats cheese, spinach and sweet potato pie) in the Great British Pie Awards 2020

This year MAD K celebrate their tenth anniversary. Yet the name isn’t familiar. This is partly because they were originally called Mum and Dad’s Kitchen. However, it is mostly because they worked anonymously, supplying pubs and restaurants as “The Banksys of the pie world!” laughs David Endean.

David and Jane started making and selling cakes after leaving their previous careers. These were so well received they kept baking, and expanded the range, to offer a gluten free product or two, although neither of them is coeliac.

“Once we started making gluten free cakes, we soon realized that no one could tell the difference and so we decided to make everything gluten free – especially as there would be no risk of cross contamination.

“Then one of our lovely customers bet that we couldn't make a steak and kidney pie that ‘tasted normal’. Well, that was it really! We like a challenge; it took us a year to develop our pastry, and I developed Tourette's in the process, but we got there! The rest, as they say, is history.

“The business started in our home kitchen in Southsea, but grew steadily - thanks in part to Hampshire Fare and our success in the Great Hampshire Sausage & Pie Competition, as well as the British Pie Awards. Our secret pastry recipe is so tasty most people do not realise it is gluten free. We have even won awards in non-gluten free competitions!  All was going swimmingly ‘til Covid-19 came and upset us all!

“Our customers were predominantly wholesale supplying the hospitality sector. As demand increased, we had made the decision to seek commercial premises, teamed up with my brother and sister-in-law, and rebranded Mum’s & Dad’s Kitchen as MAD K Ltd. We signed the lease, but hadn't yet moved in when lockdown was announced!

"The majority of our trade disappeared overnight. We had to diversify rapidly. Suddenly, we had to try to attract a new customer base by increasing direct sales and going down the retail rather than wholesale route. This involved investing in packaging and a need for marketing and promotion!

“It has been a very steep learning curve. Our customer base is gradually increasing and our new packaging is being well received. With the invaluable help of Ruth from Simply Safer [Hampshire Fare trade member] we are now an Approved Premises and are working towards Salsa Accreditation.  We continue to supply our wholesale restaurant customers, albeit on a much-reduced scale. Like most we are looking forward to the hospitality sector opening up fully again!