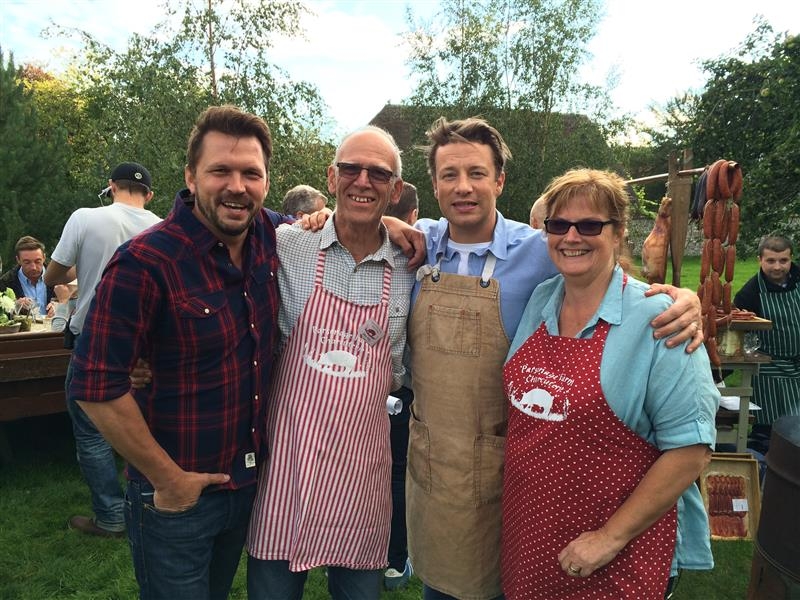 As part of the current Channel 4 series, Friday Night Feast, Jamie Oliver and Jimmy Doherty visited Parsonage Farm near Andover. They took to the road in their famous capri to see Sarah and John Mills at the picturesque farm and talk all things charcuterie.

As highlighted on the programme, a massive 241,000 tonnes of British pork is currently exported, this is over a quarter of UK’s production. It is the less popular cuts of meat such as the ribs, belly and shoulder that are often sent abroad.

Sarah and John started making charcuterie after taking part in a Hampshire Fare project funded by The Prince’s Countryside Fund. Back in 2011 it was clear that they could not continue pig farming for much longer with the cost of feed ever-increasing and they were struggling to sell their fresh meat as they found consumers weren’t always open to trying all cuts of meat. The ‘Preserving the Hampshire Hog’ project provided an invaluable opportunity to learn from one of the country’s best charcuterie makers, Marc Frederic Berry.

Five years on and Sarah and John are now supplying local restaurants with their sought after charcuterie. Many of their products combine their Hampshire meat with other local ingredients such as watercress, gin and ale. For them the move to focusing on charcuterie making has saved their business and allowed them to carry on rearing pigs. They reckon that they have tripled the money they can make from each pig.

Jamie and Jimmy spent the day at Parsonage Farm learning about the way they make their charcuterie. They were eager to highlight to the viewers that by supporting our country’s artisan charcuterie makers we can save UK pork meat from being exported. At present it is likely that we export much of our pork to then import it again as charcuterie.

The celebrities rounded up local restauranteurs and retailers to allow them to tuck in and try products from a number of charcuterie makers in their mission to make British charcuterie the mainstream.

Sarah Mills from Parsonage Farm commented on the whole experience: “Filming was a very different experience made highly pleasurable by Jamie and Jimmy who were not only interested in the campaign but really clearly really passionate about it.

We’ve been overwhelmed by the response to the show not only in the masses of orders but also the delightful comments and emails from viewers who’ve taken the time to tell us what they thought of the show and our business.

We are extremely grateful to Jamie and Jimmy for their support.”

Parsonage Farm offers charcuterie making workshops as well as their own charcuterie to buy, www.parsonage-farm.co.uk. More information about local artisan charcuterie producers can be found at www.hampshirecharcuterie .co.uk.

If you missed the programme catch up again now on Channel 4 on demand.