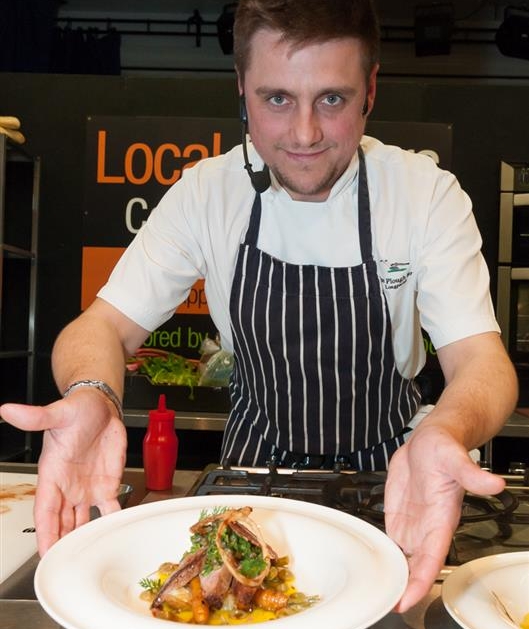 The ninth series of The Great British Menu, shown on BBC2 each evening at 7.30pm, shows selected chefs from across the country vying with each other to prepare the courses for a banquet to be held on 6 June to mark the 70th anniversary of D-Day.

The week starting 14 April was James Durrant’s opportunity, creating a different course each programme (Monday was the starter, Tuesday the fish course and so on) – all judged by Daniel Clifford, who wasn’t giving an inch.

During  the week, The Great British Menu was screened in the restaurant of The Plough while James was in the kitchen. Alongside the a la carte menu, the dish being made on television could be experienced, too. On Wednesday night, that dish was James’ main course: Blitz Spirit, a veal cheek stew and roasted veal loin with sweetbreads, mushrooms and beans and toast.

Tough judge Daniel admitted feeling emotional when he awarded James a well-deserved, perfect 10, and in The Plough the diners erupted into applause. Blitz Spirit is a showstopper of a dish, meltingly rich and well-flavoured.

Filming actually took place last September with James still sworn to secrecy about the outcome of the competition. But he did confess that it consumed six months of his life – “Because I’m so competitive!” ( As you would expect of a chef who has worked with Gordon Ramsay and Jason Atherton.)

If you want to eat at The Plough (and who wouldn’t?) you are advised to book… Since James has been on the programme, hits to The Plough Inn website have risen dramatically to 55,000.

Could this be a star in the making? Watch this space.