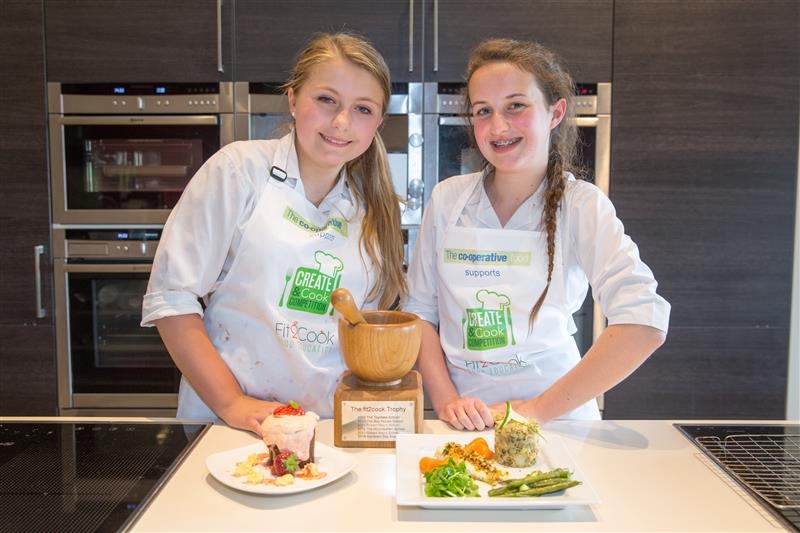 Tessa Crosbie and Jessica Case, pupils at Christ the King College in Newport, have won the 2015 Create & Cook Competition, retaining the award on the Isle of Wight for the second year running.

The 14 year old duo fought off stiff opposition from their Hampshire and Sussex rivals at the regional cookery competition final, held at Newlyns Cookery School near Hook in Hampshire (25 June). The Create & Cook Competition, which is run by fit2cook food education and sponsored by The Southern Co-operative, celebrates local food and nurtures young talent.

Winners Tessa and Jessica were praised by the judges for their technically challenging menu and their comprehensive use of local produce. The girls win £1000 for their food technology department and the fit2cook trophy, retaining it on the Island after last year’s competition was won by Joe Doncaster and Alice Hyde from Sandown Bay Academy.

Tessa and Jessica’s winning menu comprised a confit of Isle of Wight sea bass with a potato and Isle of Wight crab tower, served with local vegetables and followed by a strawberry chocolate surprise cake using home grown strawberries and Isle of Wight cream and flour. Ben Cooke, chef and owner of The Little Gloster, Gunard on the Isle of Wight and one of competition’s judges, said: “I am really proud of the Isle of Wight today; the girls cooked to a very high standard and created some exciting locally inspired dishes.  I think this Competition is fantastic because it encourages young people to think about where their food comes from.” Fellow judge and Local Sourcing Manager for The Southern Co-operative's Local Flavours range, Kate Hibbert, added: “It’s so encouraging to see young cooks engage with local food; something we're very passionate about as a regional business. All the finalists were so confident in the kitchen, showing really good teamwork and organisation; it’s brilliant!”

Very excited to have won, Tessa and Jessica said: “We didn’t expect to win but are so, so pleased - we will be dancing at home tonight to celebrate!

We’ve learnt so much about Island produce through the Competition and hadn’t realised before how much great food is grown on our doorstep.” Their opponents included Sussex winners Jasmine Cheeseman and Charlotte Cole, from The Angmering School in Littlehampton, Hampshire winners Zoe Parsons and Laura Pauley from Horndean Technology College and Hampshire runners’ up Ross Reynaldo and Daniel Maley from The Costello School in Basingstoke. All the contestants were awarded a recipe trophy with their recipes professional styled and photographed for doing so well in the Competition.

Mark Persad, Head of Marketing at Wightlink, which supported the competition on the Isle of Wight with the provision of ferry travel, said:

"Huge congratulations to both Jess and Tess for winning the competition. Wightlink is very proud to be associated with the fit2cook challenge as it celebrates local produce and the talents of our young people, both areas that our own company champions.” The 2015 Create & Cook Competition was also supported by Hampshire Fare, Hampshire Farmers’ Markets, Exclusive Chefs Academy, etch food, The Little Gloster, Chichester College, and Basingstoke College of Technology and Newlyns Cookery School.

To find out more and try the winning recipes, visit fit2cook.co.uk/recipes