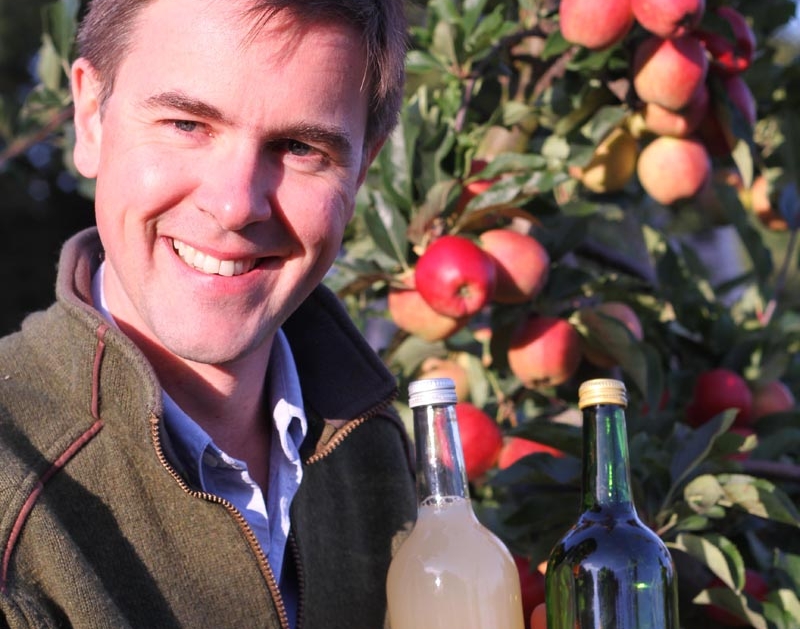 Over the last fifteen years Hill Farm Juice has grown from a small 'buy at the farm gate' business to an award-winning juicing operation selling more than twelve flavours across Hampshire and the South East. Will Dobson has just taken over the business from the former owner, Chris Mason, who has decided to retire. Will is new to juicing but not to the orchards which have been in his family for years.

When do you begin to harvest the apples?

We usually begin the harvest in early August with our Discovery apples. This year has been a very late crop so everything is running about 3-5 weeks late. After the Discovery apples are picked we move onto our main crops: Cox, Gala, Kanzi, Braeburn and some less mainstream varieties such as Egremont Russet, Worcester, Spartan and for juice only, Ashmead's Kernel.

How many apples do you expect to pick in a harvest?

Somewhere between 11 and 13 million! All our apples are picked by hand by our team of 30 pickers, it takes us around 8 or 9 weeks to pick them all.

When is the perfect moment to pick the apples?

It depends on their intended use. For long term storage, we'll pick them quite early so that we can control the final ripening in store. That's how consumers are able to buy apples in April that were picked in September. For juice we wait until they're fully ripe.

How old are the trees in your 150 acre orchard?

The oldest trees are the pears which were planted in the late 50's and early 60's. There's a saying that you plant pears for your heirs and this lot are certainly living up to that, producing a great crop year after year. By contrast the apple trees generally have a 20 year productive life.

Where can people buy your apples?

Our top quality fruit goes to Tesco, followed by the wholesale markets and then juice. That's not to say that the juicing fruit isn't top quality, it's just that it might be too small or big or have a few blemishes so it doesn't meet supermarket standards.

How does the juicing process work?

The bins of fruit come into our on-site pressing area. We can press about 500 kilos of fruit an hour and aim to get through about 5 tonnes of fruit which produces 3,000 litres of juice in a day. The juice is then left to settle over night. If it is cloudy juice it is fine to just sit as it is, clear juice needs filtering. The next day is bottling and then the rest of the week is filled with delivering and markets.

Which is the best selling juice flavour?

Cox & Bramley: it's a great substitute for wine for drivers.

Has this been a good summer for the fruit?

It's certainly been better than last year which, for growers in Hampshire, was the worst on record. Despite the press referring to a bumper crop, this year is normal which is what we want. It's very easy for apple trees to produce a huge crop and then take a year off! So for those with apple trees in their gardens that are groaning under the weight of fruit, next year might be a bit of a disappointment.

If you are not fed up of the sight of apples - what is your favourite way to enjoy them?

In liquid form! Although for a winter warmer, you can't beat a good apple crumble made with Bramley apples. We make an apple juice with ginger which is fantastic on its own and even better warmed with Winter Pimms.

You took over Hill Farm Juice a few months ago, has it been a steep learning curve and what are you enjoying most?

The former owner, Chris Mason has been fantastic and a great teacher in making juice. I see it as an honour to have been allowed to take on this multi-award winning brand. At the moment every day is a school day and I love learning the process of making a product that is so much better than what most consumers consider to be apple juice. I also enjoy dealing with a great group of customers which is very diverse: top hotels, farm shops, restaurants, pubs and our very loyal Farmers' Markets regulars.

Can you give us any clues as to where you hope to take Hill Farm Juice in the future?

First and foremost I want to maintain what Chris has worked hard to build up. In time I want to expand into distilling spirits such as apple brandy!