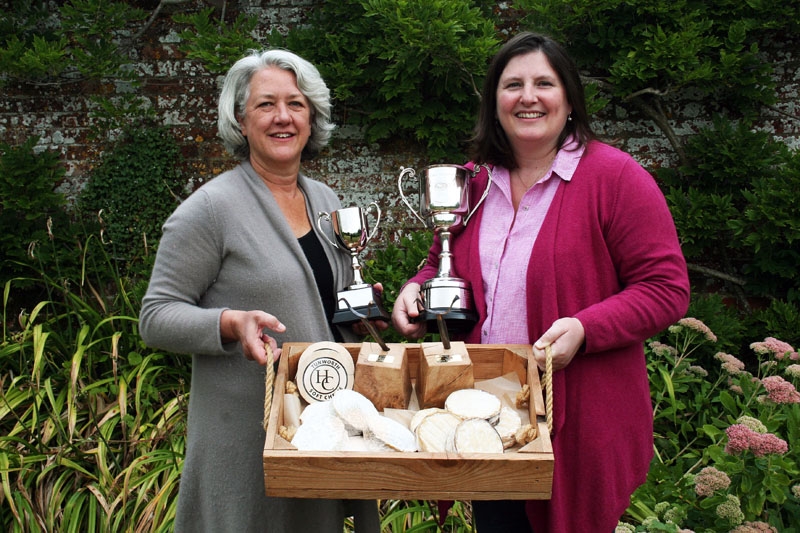 Over the past thirty years Britain has been experiencing an artisan cheese renaissance. Hampshire is home to many of these talented cheese makers including Hampshire Cheeses who have just returned from the British Cheese Awards with the title of Supreme Champion 2013.

To celebrate British Cheese Week (7 Sept-15 Sept) we met with the founder of Hampshire Cheeses, Stacey Hedges to discover more about her passion for cheese.

Stacey Hedges founded Hampshire Cheeses based in Harriard near Basingstoke in 2005. She now co-owns it with Charlotte Spruce. Stacey is originally from Sydney and it was there that her interest in cheese began.

As a student you worked part-time in a cheese shop in Sydney, what was it about this work that you so enjoyed? I was amazed at how many varieties, different flavours and textures of cheese could be made from just milk. A bit like starting an interest in wine I guess.

When you decided to start cheese making in Hampshire how did you go about learning the process? I went on a few cheese making courses, did lots of reading and visited cheese makers both here and in France to glean any information I could. Cheese makers are a friendly bunch and are generally happy to share their knowledge.

Did you know the sort of cheese you wanted to produce? I visited all the quality cheesemongers in London to ask what was missing in the British market. The answer was a soft white mould cheese with a good full flavour.

How long did it take for you to perfect the recipe? About two years until it was ready to sell but we are always trying to improve on it. There are so many factors that change weekly you have to constantly alter things in the process.

At the beginning did you ever envisage being where you are now? At first the goal was to make the best white mould cheese I could. It was more important to make a fantastic cheese than to have a huge business. The business has grown as a result of the success of Tunworth.

What is the most important element in cheese making process? If the balance of moisture and acidity on the surface of the cheese isn't right the rind won't be lovely and thin so that is key in our style of cheese. Also you need to be very gentle with the milk the whole way through the process as damaged milk can give you off flavours in the cheese.

Is there a weekly routine in the dairy? We produce cheese four days a week (six days a week for Christmas production) and Friday is our clean down day so when we leave the dairy at the end of the week it is spotless and ready for the week ahead. Each week we use 6400 litres of milk to make 3000 cheeses!

Is there a stage of the cheese making process that you most enjoy? Ladling the curds is the best part of the day. At this stage you need to work quickly and work closely as a team to get the cheeses molded perfectly so they are all the same size.

Which qualities do you think you need to be a good cheese maker? Patience, fortitude and to be slightly crazy or single minded!

At what point did you go from a one person business to taking on more employees?In November 2006 Charlotte started working at Hampshire Cheeses. She is now the head cheese maker and in charge of production. That gives me more time to spend with customers. We now have a small team of six and they work very hard to make sure Tunworth and our new cheese Winslade remain as delicious as ever.

You won Supreme Champion in your first year of business as well as this year, that must have been a shock - how did it make you feel? As anyone knows setting up a business is stressful and difficult at times so winning the award was a real boost and helped so much with sales. It really helped put Tunworth on the map. Winning the title again this year was a real shock. We are delighted! We also won an award for our new cheese, Winslade. Winning something for both our cheeses was incredible, a real honour.

How long has your new cheese, Winslade, been in development? We have been trialling Winslade for over a year. We have had lots of help from Neal's Yard Dairy in London who have been very supportive in helping us get Winslade to the point it is at now.

What do you think has brought on the resurgence in British cheese? I think the public are more interested in eating British food and that has helped but I think the main resurgence started because milk prices were so low and dairy farmers needed to add value to their milk.

How can anyone interested in becoming a cheese maker become skilled in the profession? There are some short courses available and they are a good place to start but working for a cheese maker is probably the best experience for anyone.

How should Tunworth be served? Tunworth needs to be at room temperature for a few hours in order to bring out the full flavour and allow it to become soft and creamy. Serve it with crusty bread and a full bodied white wine or some delicious English cider.

Where can people buy your cheese? We sell Tunworth at Winchester and Petersfield Hampshire Farmers' Markets, specialist cheese shops, delis and farm shops and some selected Waitrose stores.