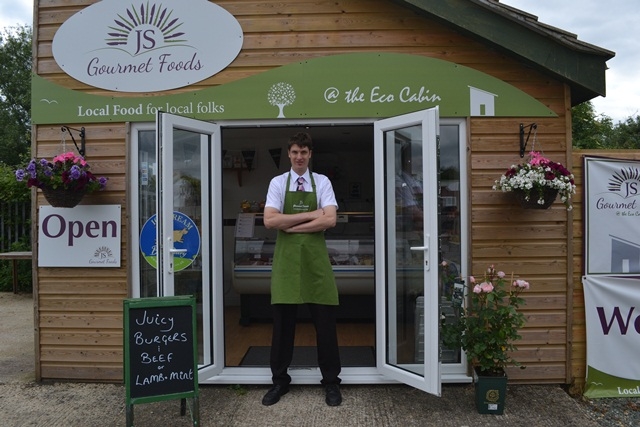 James Sutton is a man on a mission: “To bring local food to local folks”.

He opened JS Gourmet Foods, an Aladdin’s cabin of local produce, just 14 weeks ago, but told Hampshire Fare: “I’ve wanted to do this for years.”

His business is already doing well, mostly due to the fact that James is so well known in the local area having worked for the butcher’s in Botley and following that for Westlands Farm Shop, near Wickham, for many years (and whose pork, beef and lamb he now stocks in his own shop).

His plan had been to take over the butcher’s in Botley after it closed, but then James came across the ‘eco-cabin’ in Hillier’s Garden Centre, Woodhouse Lane, Botley, which also provides plenty of easy, free parking and possibilities of expansion in the future.

He stocks a wide range of Hampshire produce. There is piccalilli and lemon curd by Charlotte Brown Handmade, sweet onion marmalade by Spice ‘n’ Easy, a selection of cheeses including Old Winchester from Lyburn Cheesemakers, Tunworth from Hampshire Cheeses and Isle of Wight Blue from Isle of Wight Cheese Company. There are faggots and dry-cured bacon from Ambrose Sausages, natural yogurt from Bere Dairy, eggs from Lycroft Farm in Swanmore, biscuits from Little Bee Bakery, marshmallows from Belinda Clark Gourmet Confectionary, Caymanas Caribbean Rum Cake (and Caymanas new rum and raisin ice cream, a new addition which James is raving about “It’s fantastic, sales are going phenomenally well”), local honey, local rapeseed oil... James also makes his own burgers, sausages and proper black pudding using Westlands Farm meat. There are even curry sauces from Madhuban in Liss – “It’s like going out for a proper curry, I get through a hundred of those a week”.

“it’s about helping other small businesses have a local outlet for their quality produce,” continues James, who is particularly proud of the number of producers he stocks who have been awarded Great Taste Awards.

“On Saturdays we stock freshly baked bread from a small artisan bakery in Southampton. The first week we sold 10 loaves, the second week 30, and since then we’ve sold 120 loaves a week. What with a fruit and veg stall turning up every Wednesday, Friday and Saturday, it does mean that people can come down here and get most things that they need.”

Customers have said that they haven’t bought any meat from a supermarket since finding JS Gourmet Foods. Others have commented on James’s friendly and helpful service. He really knows his products and champions them. He is environmentally aware, too. Not only is power for the cold cabinets and freezers supplied by solar panels on the cabin roof, but he wraps meat the old-fashioned way in greaseproof paper and uses paper bags whenever possible.

All of this is reminiscent of childhood memories of shopping back when things were local and more personal. Customers have told James that this is exactly the sort of shop they’ve been looking for.

James says: “My personal belief is that people will come if you are good enough. People will find the business. I know people are already talking about JS Gourmet  Foods.”