Hampshire's love for local shines through 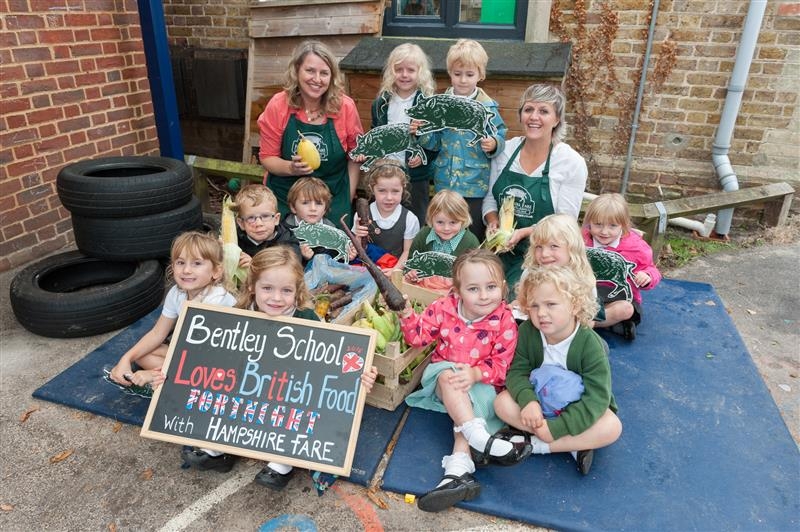 Hampshire Fare, Bentley Primary School and Emsworth are all celebrating after being hailed heroes of the national British Food Fortnight competition.

Hampshire Fare collaborated with local producers to put together a day of engaging food and farming activities for the pupils of Bentley Primary School which was placed third in the competition. Pupils visited a local farm and vineyard, baked bread, watched a butcher in action, made vegetable kebabs and more.

Katy Pinchess, the head teacher of Bentley Primary School commented: “The children were very excited about this fantastic day of learning to showcase some amazing local farmers and producers. This area was mainly agricultural just two generations ago but now so many of our families work in London there is the danger that our pupils do not see the links between what is grown and reared and what they eat and buy.”

The winners were chosen by a panel of judges led by The Rt Hon Andrea Leadsom, MP, Secretary of State for Environment, Food and Rural Affairs; Breige Donaghy, Director of Delicious Food, Co-op Food, Chef Raymond Blanc, OBE and Alexia Robinson, Founder of Love British Food.  Together they were looking for events that strengthened the local community, educated people about British food and eating locally, and supported the economy.

Raymond Blanc commented on the event held by Hampshire Fare: “What a wonderful event for all the children at Bentley Primary School.  As you know, I am a huge advocate that we teach our children, from a young age, about their food – how to plant, nurture, what to create and when so to me, this type of event should happen in every school, at least once a year.  Well done to you and I’m sure the Apple Dapple Cake was delicious!”

Hampshire Fare is passionate about engaging the younger generation in the food and farming happening on our doorstep. Last year Hampshire Fare held a similar event during British Food Fortnight at Wicor School. This year Wicor School used the model to repeat the event, it is hoped that Bentley School will do the same in 2017 whilst Hampshire Fare works with another school and more local producers.

Emsworth is also busy celebrating having come second in the competition with their fortnight of food events. This is the third time Emsworth has come in the top two in the competition and they have been hailed by the judges as a benchmark for other communities to follow.

Bath was announced as the winner with their programme of food festivals, cooking courses and local produce breakfasts for schools involving more than 30 local businesses.  Environment Secretary Andrea Leadsom will present the winners and runners up with their certificates on 26th January 2017.  She said: “It was a real pleasure to judge this year’s British Food Fortnight competition, which celebrates the diversity, quality and tradition of our great British food and drink across the country.  The range of applications shows, rightly, how proud we are of our home-grown produce and Bath – with its fortnight of fun and creative activities celebrating the best of British food – was the standout winner.”