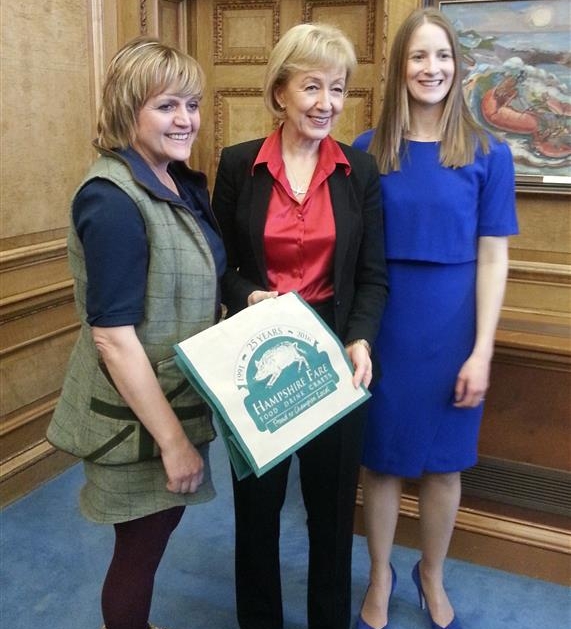 The prestigious event held at the Secretary of State’s Office in London was organised by Love British Food to announce the winners of a competition run in association with The Telegraph and sponsored by the Co-op. The competition recognises the most imaginative and inclusive celebrations of British food held during the national celebration, British Food Fortnight.

During British Food Fortnight (17 September 2016-2 October 2016) Hampshire Fare collaborated with local producers to put together a day of engaging food and farming activities for the pupils of Bentley Primary School which was placed third in the competition. Pupils visited a local farm and vineyard, baked bread, learnt about bees, watched a butcher in action, met a dairy farmer and cheesemaker, made vegetable kebabs and more. The children also tucked into a traditional school dinner.

The winners were chosen by a panel of judges led by the Rt Hon Andrea Leadsom, MP, Secretary of State for Environment, Food and Rural Affairs; Breige Donaghy, Director of Delicious Food, Co-op Food, Chef Raymond Blanc, OBE and Alexia Robinson, Founder of Love British Food.  Together they were looking for events that strengthened the local community, educated people about British food and eating locally, and supported the economy.

Raymond Blanc commented on the event held by Hampshire Fare at Bentley Primary School: “What a wonderful event for all the children at Bentley Primary School.  As you know, I am a huge advocate that we teach our children, from a young age, about their food – how to plant, nurture, what to create and when so to me, this type of event should happen in every school, at least once a year.  Well done to you and I’m sure the Apple Dapple Cake was delicious!”

Commercial Manager of Hampshire Fare, Tracy Nash attended the awards event with Jenny Shaylor,  a parent at Bentley Primary School who was instrumental in the organisation of the event at the school. Tracy commented: “Today has been such a wonderful experience. We know how passionate we are at Hampshire Fare about local food and the work we do to engage people with the county’s food and farming. To have these efforts recognised in a national competition and to attend today’s event is a fantastic pat on the back. We only look forwards though at Hampshire Fare so we are already busy planning our 2017 British Food Fortnight event!”

Tracy was joined at the event by Alistair Gibson there on behalf of Emsworth. It is the third time that Emsworth packed programme of food related events run throughout the two weeks of British Food Fortnight has received an award in the competition. Infact they have been hailed by the judges as a benchmark for other communities to follow.

Bath was announced as the winner with their programme of food festivals, cooking courses and local produce breakfasts for schools involving more than 30 local businesses.  Environment Secretary Andrea Leadsom said: “It was a real pleasure to judge this year’s British Food Fortnight competition, which celebrates the diversity, quality and tradition of our great British food and drink across the country.  The range of applications shows, rightly, how proud we are of our home-grown produce and Bath – with its fortnight of fun and creative activities celebrating the best of British food – was the standout winner.”