Hampshire Young Cooks through to Create and Cook Final 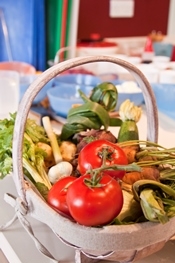 The Hampshire finalists of the 2015 Create & Cook Competition have been announced by fit2cook. The competition is sponsored by The Southern Co-operative and is open to all 12-14 year olds who can enter through their school food technology department by designing a two course menu using as many local ingredients as possible.

There was a really high standard this year from schools across the county which made it a difficult decision for the judges and founders of the competition Min Raisman from fit2cook, Andy Mackenzie from the Exclusive’s Young Chefs Academy and home economist Davina Tibbetts. But after careful consideration four pairs of young cooks have been chosen to cook their dishes in front of a panel of judges including top chef Adam Fargin from Aviator, Farnborough on Thursday 21st May at the Basingstoke College of Technology.

Isobel Dunn and Sophia Downing from   Bay House School in Gosport who will be cooking Sophia's vegan vegetable patch pie with her own grow vegetables and Izzy's garden cake.

Renee Servin and Sara Cepele from Bitterne Park School in Southampton who will make their own ravioli filled with Laverstoke buffalo mozzarella & Greenfield pork bacon with a homemade tomato sauce. For pudding they will be making a lemon tart with raspberry sorbet and coulis.

Ross Reynaldo and Daniel Burgess from The Costello School, Basingstoke will cook a  chicken with a Laverstoke mozzarella and basil stuffing with local seasonal vegetables and a trio of home grown rhubarb - rhubarb and custard tart, rhubarb panna cotta, rhubarb pavlova

Zoe Parsons and Laura Pauley from Horndean Technology College will cook local crab tortellini with lemongrass and ginger sauce and a creme brulee with raspberry coulis and shortbread biscuits.

Two pairs from this great line up will then win a place in the Regional Final of the Create & Cook Competition in June which will be held at Newlyns Farm Cookery School. Here they will cook against the top cooks from Sussex and the Isle of Wight to find an overall 2015 Champion!  There is a load of talent and passion in this year’s line up so it will be hotly contested competition.