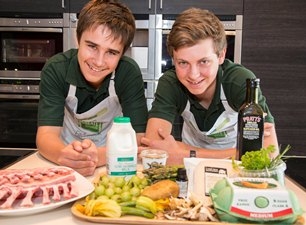 Two 14 year old boys, Dan Moya and Chris McLennan from Robert May's School in Odiham, have been crowned champions of the 2013 Create and Cook Competition, triumphing over stiff competition from their Sussex and Isle of Wight counterparts.

Run by fit2cook food education and sponsored by The Southern Co-operative, the competition attracted numerous entries from 12-14 year olds in schools across Hampshire, West Sussex and the Isle of Wight. Following cook-offs in each county, four teams of two reached the regional final, held at Newlyns Cookery School in Hampshire on 26 June.

Dan and Chris wowed judges with a stunning menu of rack of herb crusted lamb with a cherry reduction sauce, served with asparagus and a potato and courgette rosti cake. This was followed by a dessert of profiteroles with gooseberry cream drizzled with white chocolate and caramelised pistachios. The boys incorporated as much local produce as they could, which was the focus of the competition, and their dishes had real local flavour.

Competition judge Phil Ponsonby, Chief Operating Officer for The Southern Co-operative, said: 'It is always a pleasure to judge this competition, not just to enjoy the food that has been cooked but to meet the pupils and be inspired by the creativity of their dishes. This year has definitely seen the highest standard of entries and it was a very difficult decision to choose a winner. We were so impressed by the creativity of the chefs, their knowledge of local ingredients and to see how the finalists had gone to so much effort to find out about local ingredients and how they are produced.'

On winning the fit2cook trophy, Dan and Chris said: 'We are gob smacked that we've won and so happy that all our effort has paid off! We have put so much into this competition, along with our teachers Mrs Tindle and Mrs Pluthero. We really weren't expecting to win, especially when we saw the other finalists' dishes as they were of such a high standard. It has really encouraged us to cook and the competition has been such a great experience.'

Dan & Chris were also presented with £1000 for their school food technology department and a trophy of their recipes made from their own recipes professionally styled and photographed. The boys, who are keen to become chefs, have both been invited to spend an afternoon with Executive Chef Andy Mackenzie at Lainston House Hotel near Winchester to see a professional kitchen in operation.

The other competition regional finalists were Beth and Naomi from Andover's John Hanson School in Hampshire, Rosie and Moza from Ryde Academy on the Isle of Wight and Emily and Amber from Chichester High School for Girls in West Sussex. All the finalists enthused about the value of entering the competition, saying it was great experience and how it would look good on their CVs. Dan and Chris enthused: 'Give it a go, don't be intimidated; you get such a sense of achievement making a dish that someone likes and it makes everyone really happy!' As an added bonus the boys' teachers had promised to wash up after the final if they won the competition!

To see Dan and Chris' recipes and all the finalists' recipes at the link below.