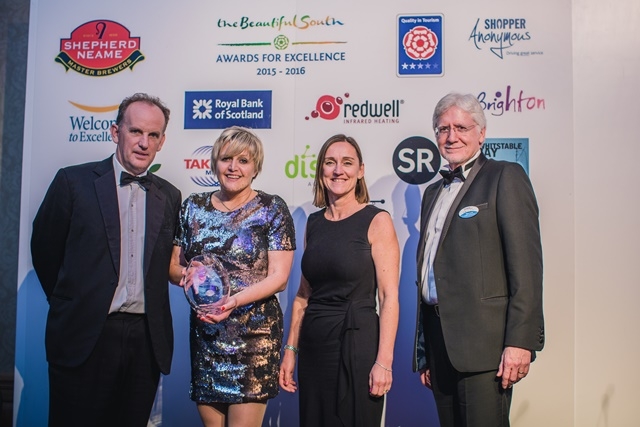 Hampshire shone as a tourist destination at this year’s Beautiful South Awards. The annual awards sponsored by Shepherd Neame, were held at the Grand Hotel in Brighton on Wednesday 2nd December.

The awards were established over 20 years ago to help drive ambition, raise standards throughout the region and reward quality, innovation and customer service. Hampshire’s buzzing tourism scene was reflected in the results with multiple businesses from the county being recognised and rewarded for their hard work.

Hampshire Fare is celebrating after receiving Silver for the Hampshire Food Festival for Tourism Event of the Year. The annual event is in its fifteenth year and involves over 70 food and farming events held across the county throughout the month of July. This is the fourth consecutive year that the event has received either a Gold or Silver at the awards.

Tracy Nash, Commercial Manager of Hampshire Fare commented: “Winning Silver is a fantastic achievement and a great reward for all the work Hampshire Fare puts into arranging a festival of such magnitude. It also highlights what a thriving local food scene we have in Hampshire, the festival involves hundreds of talented farmers, producers and chefs across the county and this award goes to them too for making the festival such a success. It is a real team effort! This year’s Beautiful South Awards certainly sung Hampshire’s praises with so many awards going to our local restaurants, accommodation venues, hotels, pubs and tourist attractions. It’s been a proud night for Hampshire!”

Hampshire Fare celebrated with its members at the event as Wallops Wood Self-Catering Cottages scooped two awards, a Gold for Access for All Tourism Award and a Silver for Self-Catering Holiday Provider of the Year. A Gold went to Montagu Arms Hotel in the Flavour of the South East category and they also claimed Bronze in the Small Hotel of the Year. Meanwhile Careys Manor Hotel and SenSpa and Marwell Hotel collected Silver awards for Business Tourism Award. Staff from Chewton Glen were presented with a Silver for Large Hotel of the Year and Marwell Zoo was awarded Bronze for Large Visitor Attraction of the Year.

Commenting on the awards, Nigel Smith, CEO of Tourism South East said, “It was a fantastic evening at the Grand Hotel and a real privilege to be in the company of so many dedicated and passionate tourism businesses. The excellent quality of facilities, service and approach makes our role of promoting the South East so much easier and is one of the main reasons why we are the most popular UK tourist region outside London.”

The winners are now invited to champion the South and South East of England at VisitEngland’s Tourism Excellence Awards taking place during English Tourism Week in March 2016.

All results can be viewed here.