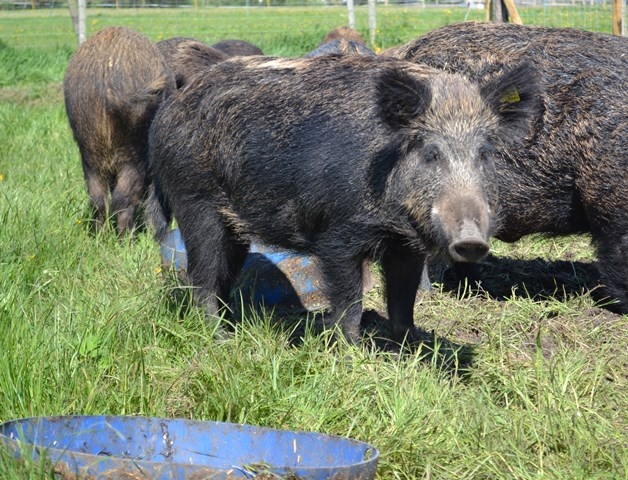 As reported on BBC South this week, over recent years pig farmers across the UK have faced increasing obstacles. The cost of rearing pigs has become crippling for many farmers with feed prices rising. At the same time the price tag pork commands in butchers and supermarkets continues to fall making it almost impossible for producers to make any profit.

According to figures provided by Bpex pig farmers are on average only making 10p per kilo of pork they sell. In order to survive UK pig farmers have resorted to clever diversification to increase income. A group of Hampshire producers have trained in charcuterie making. Four years ago the local food group, Hampshire Fare, ran a project funded by The Prince's Countryside Fund. Two years later a group of skilled charcuterie makers emerged ready to sell their new products to the market.

Producing charcuterie adds value to the pork meat as it can command a higher price. It also saves wastage as it is a way of preserving the meat. No-one could have predicted the long term success the project would have.

Since the project came to a close Hampshire Charcuterie had been formed bringing together a number of local producers specialising in charcuterie. Sarah and John Mills from Parsonage Farm near Andover participated in the project and now make a popular range of charcuterie. Sarah reflected on what the diversification has meant for the: " A few years ago we sat down and worked out our figures and concluded we could no longer afford to rear the pigs, it just didn't make business sense. Then the charcuterie project came along and now we are producing so much charcuterie we can only just meet the demand and we have stopped selling fresh meat to focus our resources on charcuterie. We get requests every day from restaurants and bars wanting our products, people love the idea of quality salami and other charcuterie made from responsibly reared and fully traceable meat.  Charcuterie has saved our business."

Meanwhile New Forest pig farmer, Jamie Burgess, decided the diversification he required to conquer the challenges he faced was to introduce wild boar back into the forest. Three hundred years ago wild boar roamed freely in the New Forest, times have changed and Jamie must have a dangerous animals licence to ensure they are secure on the farm.

Charcuterie is again at the centre of this success story as much of the wild boar is being          supplied to the nearby curing company, A Pinch of Salt. Here third generation butCher, Alan  Bartlett works closely with Chef Director of The Pig Hotel, James Golding to create closely  guarded curing recipes on local meat including the wild boar.

Tracy Nash, Commercial Manager of Hampshire Fare commented on the situation of local  pig farmers: "It is only thanks to charcuterie and other diversification that our local pig farmers  have been able to survive the latest financial challenges. The project we ran provided an  invaluable opportunity for out farmers to upskill and protect themselves. I urge members of the  public to support our local pig farmers, check the origin of the pork you buy and sample  Hampshire Charcuterie, once you do you'll be hooked!"

More information about where to buy local pork and charcuterie can be found on our website  and in our Local Produce Guide.