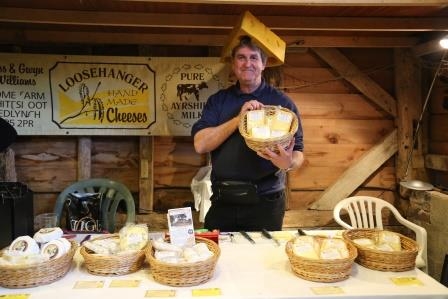 In April a group of local producers joined together to raise money for a community in Thailand.

The Hampshire Food Night was organised by John and Sarah Mills from Parsonage Farm near Andover. The link with Thailand was initiated by talented butcher and charcutiere Marc Frederic-Berry. Sarah and John wanted to support Marc in his fundraising quest after benefitting themselves from his expertise over the years.

The project aims to develop a small farm so that it can become more sustainable and offer a future for generations to stay in the village and work rather than leave their families in pursuit of careers in Bangkok.

Whilst guests listened to insightful talks from Gwyn of Loosehanger Cheeses and Belinda from Belinda Clark Confectioners they supped on sparkling wine from Jenkyn Place and beer from Betteridges. Tempting tapas were offered including Jakes Artisan Pies, Devese pâté and Parsonage Farm salami.

Thai curry made with Blackwater Pork according to a recipe from Noy, the Thai lady behind the farm development, was then served.  Jude’s icecream and Tunworth Cheese with Little Bee Bakery Oat Cakes brought the delicious feast to a close.

Guests had the opportunity to browse stall and taste local Twisted Nose Gin. The event ended with an auction raising well over £350 from three hampers of Hampshire Fare produce including Upham Beer, Lyburn Cheese, Mo Mo’s Homemade marmalade and Danebury Wines. Other prizes included an Ambrose Voucher and a chocolate Kerplunk game from Choccomondo.

Sarah Mills commented, “We are delighted with how the event has gone. We are blown away by the support we have received from other local producers and Hampshire Fare members. Without their help we would not have been able to raise such an impressive amount of money. We are pleased to be able to assist another small farm to diversify just as we have”.

In total £1600 was raised. The money has been used to purchase a dry feather plucker for the farm in Thailand.