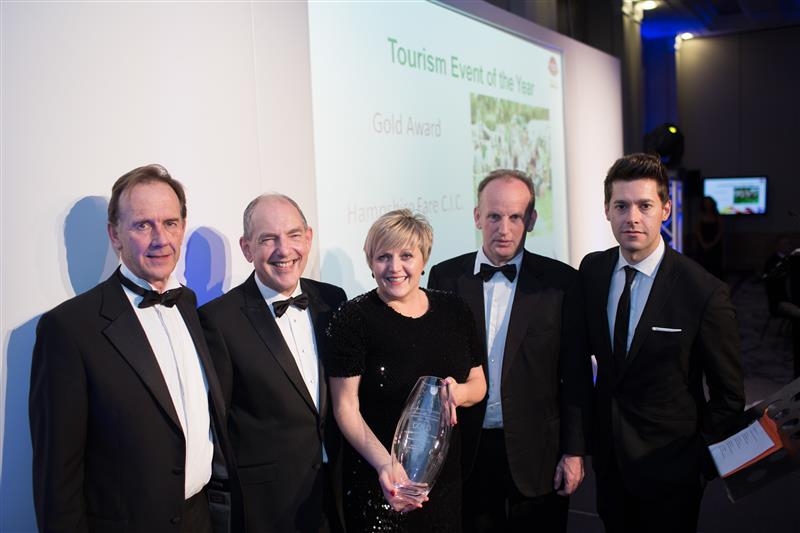 Hampshire Fare has been awarded Gold for ‘Tourism Event of the Year’ at the Beautiful South Awards for Excellence 2014-2015, held by Tourism South East.

The winning event, the Hampshire Food Festival, is organised by Hampshire Fare. It began as a weekend event in Winchester with the core focus of promoting local produce, and over the years the Festival has developed into a countywide, month-long celebration of Hampshire’s food and farming.

Hampshire Food Festival encourages visitors and residents to discover and enjoy local food and drink, meet local producers and understand how food is reared, grown and produced in Hampshire. It is one of the only food festivals to allow visitors to go ‘behind the scenes’ in this way.

Tracy Nash, Commercial Manager, Hampshire Fare, and Mike Wright, Chairman, Hampshire Fare, received the award at a special presentation event celebrating elite visitor experiences across the South and South East of England and recognising their contribution to the tourism industry.

Tracy commented: “We were genuinely surprised to win the Gold Award for Excellence as we felt that the other entries in this category were so strong, but we were also delighted to receive this accolade as recognition of the value of the Hampshire Food Festival to the county’s cultural life and to the local and rural economy.

“I know the Hampshire Food Festival is of huge importance to the county’s food and drink community, and we would like to thank the efforts of all those Hampshire Fare members and, indeed, many non-members, who contribute to the event.

“The Hampshire Food Festival goes from strength to strength. Next year will be our 15th anniversary of the Festival and we promise it will be even more spectacular and special than ever.”

Established over 20 years ago, The Beautiful South Awards help raise standards by rewarding excellence, quality, innovation and customer service in the tourism industry.  As a recipient of this Award, Hampshire Fare has now been invited to champion the South East at the national VisitEngland awards in 2015.

Commenting on the awards, Peter Colling, Managing Director, Tourism South East, said: “This year the overall standard of entries was higher than ever making it extremely tough for the judges. The winners truly are the best of the best and a match for any in the country. We are now looking forward to our winners taking the spoils at Visit England’s National Tourism Excellence Awards.”