Hampshire Feather and Fur - for the alternative Christmas 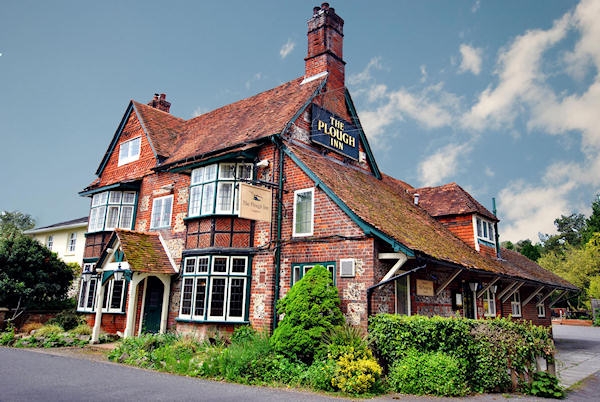 Chef proprietor at The Plough Inn Longparish, James Durrant, has devised an alternative festive menu which is guaranteed to impress your friends and family. James has more than 16 years experience in Michelin starred restaurants across London and the UK. He trained under the watchful eye of Gordon Ramsay working up to senior sous chef at the highly acclaimed Gordon Ramsay at Claridges Restaurant. He then went on to the position of head chef at the award-winning Maze in Mayfair before being promoted to executive chef. He now owns Durrant Restaurants Limited and took over The Plough Inn in March 2012.

Ask your butcher to remove the legs from the birds and clean them out to leave you with a crown and the two legs separately.

Roughly chop the onion, carrot, celery, and garlic then in a heavy bottomed pan roast the veg off until evenly coloured add the star anise, allspice, peppercorns, thyme, bay leaf continue to roast for 1 - 2 minutes then de-glaze with red wine vinegar reduce to a glaze. Add the port and the red wine, reduce to a glaze and then add the veal stock bring to the boil and simmer.

In a separate pan seal off the legs then add them to the stock and braise for approximatley 1 hour. When they are tender remove from the sauce. Pass the remaining sauce through a fine chinois and reduce by about half until it reaches a rich flavour and good consistency. Warm the legs back up in the sauce before serving.

To cook the crown seal evenly in a hot smoking pan with butter and oil then cook for 4-5 minutes at 180C. Allow to rest for 3 minutes then remove from the crown and serve. They should still be slightly pink.

Boil the quail eggs for 2 minutes then refresh in cold water and peel. Mix the venison sausage and pork sausage together and season then add the picked thyme leaves. Roll the mix out on a work top approx. 5mm thick carefully wrap the eggs evenly in the mix making sure you don't burst the egg. Set them aside in the fridge to firm up for 30 minutes. Then roll them in flour followed by egg then breadcrumbs. Set aside in the fridge until ready to serve. Deep fry at 180C until golden brown.

Sugar and salt to taste

Squash: Cut the squash in half peel and dice the top half add t a pan with a knob of butter and a pinch of salt cook for 20 minutes on a low heat until it has all broken down then puree in a blender and season.

With the bottom half scoop out and discard the seeds and then cut into wedges. Roast in a frying pan with a little oil and butter until they start to colour then into an oven at 180c for 8 - 10 minutes.

Red cabbage: Shred the cabbage and the onion, sweat down in butter until cooked right down add the red wine vinegar, red wine and the sugar continue to cook until all the liquid has reduced. Season to taste.

Pickled Girolles: Bring all the ingredients to the boil add the clean girolles then allow to cool and serve.

Toasted walnuts: brown the nuts off in a pan with the butter season with sugar and salt.

Image: The Plough Inn in Longparish where James Durrant is chef proprietor.