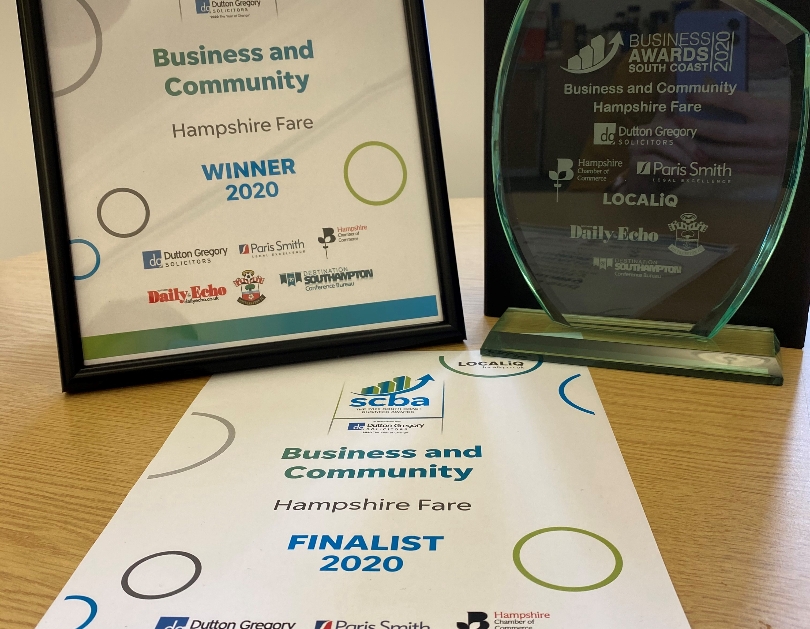 Hampshire Fare has won the Business & Community Award at the South Coast Business Awards which celebrate the contributions made by businesses in Hampshire and the Isle of Wight to the local economy.

The Award was in recognition of Hampshire Fare’s ongoing initiatives during and post lockdowns. These publicised and supported the role Hampshire Fare members were playing in their local communities, and how they were adapting their services to help residents keep their cupboards stocked.

Such initiatives included Hampshire Fare creating and continually updating downloadable listings of members delivery/online services, along with the design and launch of a major campaign (supported by Hampshire County Council and Enterprise M3 LEP) to encourage consumers to stay loyal to the relationships formed with local producers and suppliers during lockdown. Based on the slogan ‘Stay Loyal Stay Local’, the campaign featured artwork designs focusing on the individuals behind local food and drink supply chains, such as farmers, fishmongers, bakers, butchers and cheesemakers. These designs were used across an extensive sticker, social media and leafleting campaign as well as a series of downloadable colour-in characters aimed at helping educate children about local produce.

The Campaign also  empowered businesses who had helped their communities to ask those communities for support in return. The core message was about loyalty, particularly as such relationships are essential for the local economy, the environment, sustainability and wellbeing.

Tracy Nash, Commercial Manager, Hampshire Fare, said: “Winning this award means more this year than any other year. We regard it as a huge positive in what continues to be a challenging time. Any organisation can perform well when times are good, but when things are difficult, businesses need to go above and beyond to shine. So, this Award is not only for Hampshire Fare, but recognises all our members’ efforts and our sponsors’ support.”