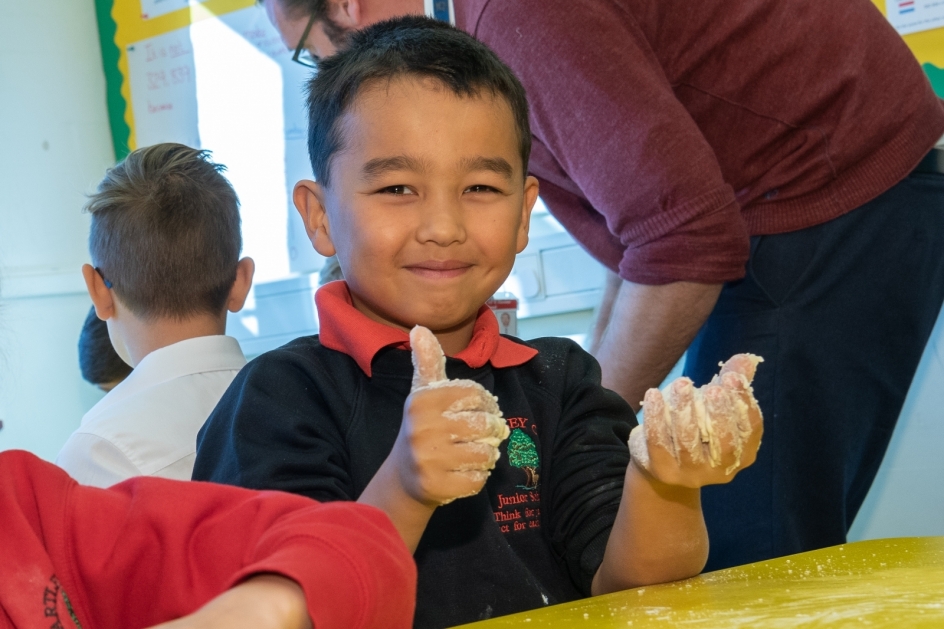 Hampshire Fare, has been announced as the winner of this year’s British Food Fortnight competition.

Founded in 2002, British Food Fortnight (22nd September - 7th October) is a nationwide celebration of British food and drink organised by Love British Food. Hampshire Fare has been involved in the initiative for the past four years, collaborating with local producers to run sessions in local primary schools aimed at inspiring young children to question the provenance of their food.

This year, Hampshire Fare worked with Year 5 pupils at Bartley Junior School near Southampton. Honesty Group, Lyburn Farm, New Forest Fruits and Naked Jam all led sessions covering topics such as how bread is made, fruit growing, jam making and the production of artisan cheese.

Tracy Nash, Commercial Manager of Hampshire Fare commented: “We are over the moon to have won the competition and feel honoured, especially knowing just how many fantastic events and activities took place across the country during the fortnight.

After being inspired by the events in Emsworth for British Food Fortnight, we arranged an event at Wicor School. Every year since we have selected a new school to work with whilst the previous school has gone on to hold their own event in subsequent years. In this way, we planted a small seed and slowly it is growing in impact across the county.”

The British Food Fortnight competition acknowledges the people behind the most imaginative and inclusive celebrations of local food and the harvest. Entries were received from across the country and included pre-schools, school meals, care homes, hospitals and community festivals.

Alexia Robinson, Founder of Love British Food said: “This year the British Food Fortnight competition saw a record number of entries.  So many people got involved from food festivals, hospitals, care homes, schools, universities and many more to help us rediscover and appreciate all that is great about British food.

We are incredibly proud of all entries we receive particularly from schools and care homes that work to such tight budgets.”

The winners were chosen by a panel of judges including; Cathryn Higgs, Head of Food Policy, Co-op Food, Breige Donaghy, Director of Delicious Food, Co-op, Chef Raymond Blanc, OBE, Liz Earle, MBE wellbeing writer and farmer, Candice Brown, Food Writer and Alexia Robinson, Founder of Love British Food.  Together they were looking for events that strengthened the local community, supported the economy and educated the public about British food and eating locally.

Judge and Chef, Raymond Blanc said “The Hampshire Fare team are so passionate and committed about supporting and promoting the talented local produce and craft communities and I love the fact that the children get so inspired and learn so much”.

Hampshire Fare worked alongside other local organisations during the fortnight. Hampshire County Council Catering Services (HC3S) attended Bartley Junior School as part of their programme of British Food Fortnight events. The Lantern Community in Ringwood got involved in making props for the Winchester Cathedral Harvest and local producer market.  The Hampshire Fare team also attended ‘A Thought for Food Market’ in Emsworth to really help consumers find out more about the story behind their food.

As winners, Hampshire Fare will be given the opportunity to have a Love British Food ambassador at their 2019 event.