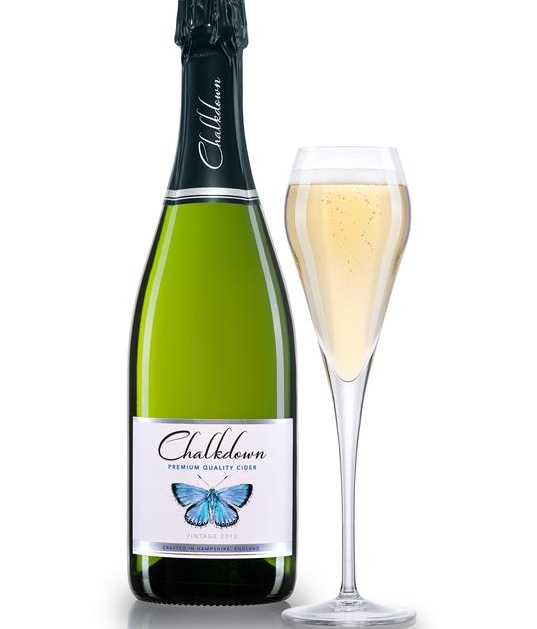 Chalkdown Cider, made in Andover Down, Hampshire from locally grown apples, has been confirmed as winner of the trophy for best bottle conditioned cider in the prestigious International Cider Challenge.

The award was made a by a sixteen-strong panel – comprised of buyers, award-winning independent retailers, cider experts, journalists and cider makers. There was praise from the judges for the consistent quality of entries across the board in the competition which is now in its eighth year.  Entries this year came from the UK, Ireland, France, Australia, Czech Republic, Estonia, Japan, Latvia, Spain, Sweden, South Africa, and the US.

Chalkdown Cider stands out from the crowd not only thanks to its award-winning credentials but also because of the way it is made. The method is similar to that used to make Champagne. It is fermented first in a tank and then a second time in the bottle.  After each fermentation, the cider is left to age on its lees, which develops the flavour and complexity of the finished product with the whole process taking two and half years.

Cider maker, Piotr Nahajski from Winchester, was delighted with the award.  “This was our first release of Chalkdown and we are really pleased to be recognised with such a prestigious award in the first completion that we’ve entered.  Everything that we do is designed to create the purest and most perfect expression of English apples in a cider, starting with hand-sorting over 250,000 apples to hand-polishing each bottle before it leaves the cider barn.  The trophy is a terrific affirmation of the love and care that we put into Chalkdown cider”.

Chalkdown is stocked by Fortnum and Mason in London, and by Hampshire retailers including Wine Utopia, The Naked Grape, Good Life Farm Shop, Setley Ridge Farm Shop, and Bayleaves Larder. It can also be purchased online at www.chalkdowncider.com.

Read our interview with Piotr.