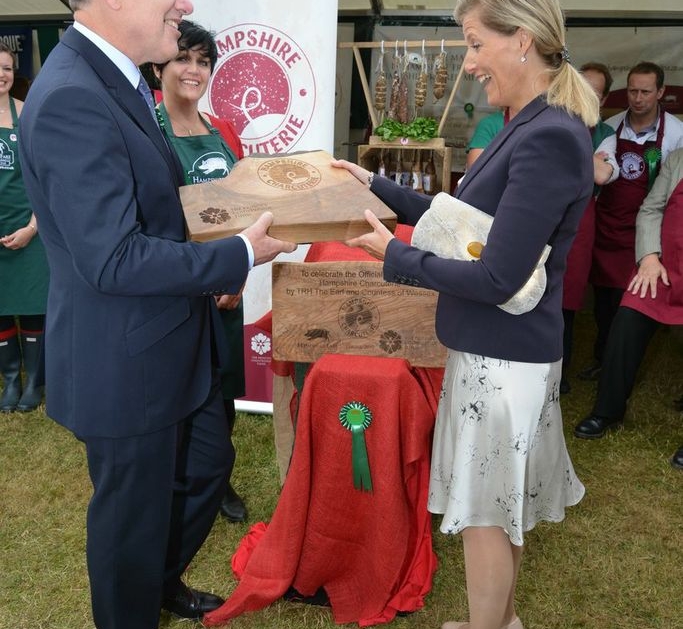 After two years of training and hard work a group of local pig farmers unveiled their own range of charcuterie to the public on Wednesday 31 July. The producers were honoured to welcome HRH The Countess of Wessex to their stand at the New Forest and Hampshire County Show to officially launch Hampshire Charcuterie.

The launch marked the culmination of the 'Preserving the Hampshire Hog' project which was created and led by the county food group, Hampshire Fare and supported by The Prince's Countryside Fund. The project was designed to tackle the challenges faced by pig farmers including increasing feed costs and a lack of European funding. The future was looking uncertain for our local pig farmers with many losing £20 per pig reared.

Two years on and the farmers involved in the project are now more confident about the sustainability of their businesses. The project has given them the opportunity to have training from charcuterie expert, Marc-Frederic Berry. As evident at the New Forest and Hampshire County Show they are now skilled charcutiers themselves with the ability to create salami, chorizo, p?t?, bresaola, pancetta from their locally reared meat. This diversification into new products extends the shelf life of the producers' meat through curing and adds value to the meat.

'Hampshire Fare has worked closely with local producers to deliver an innovative project. We are extremely proud of the outcome. The success of the project is evident in today's amazing display of delicious charcuterie made from Hampshire meat by our talented local producers.

The project has only been possible thanks to the support of The Prince's Countryside Fund and the talents of Marc-Frederic Berry. We are all very excited about the future of Hampshire Charcuterie. We ask local restaurants to get behind the products and feature them on their menus and for members of the public to support Hampshire Charcuterie too. Help us to preserve the Hampshire hog!'

The Hampshire Charcuterie stand certainly drew in the crowds at the show with visitors commenting on the array of flavours and quality of the products. Rob Golding from Hayling Island was impressed by the salami: 'It is delicious and it is great that we can buy it and be supporting local producers. I also like the idea of knowing the provenance of the charcuterie and the fact that it is great quality.'

Hampshire Charcuterie is being produced across the county by independent producers working together on the range.

So what is charcuterie?

As explained by the expert, Marc-Frederic, in his book 'Le Charcutier Anglais':

'Charcuterie is the artisan skill of taking raw meat and preserving it by curing, smoking, cooking or a combination of all three methods. Some examples are; Jambon, Boudin Noir, Gayettes, Fromage de T?te and P?t? en Croute (translated as ham, black pudding, faggots, brawn, and pork pies) - to name just a few.'