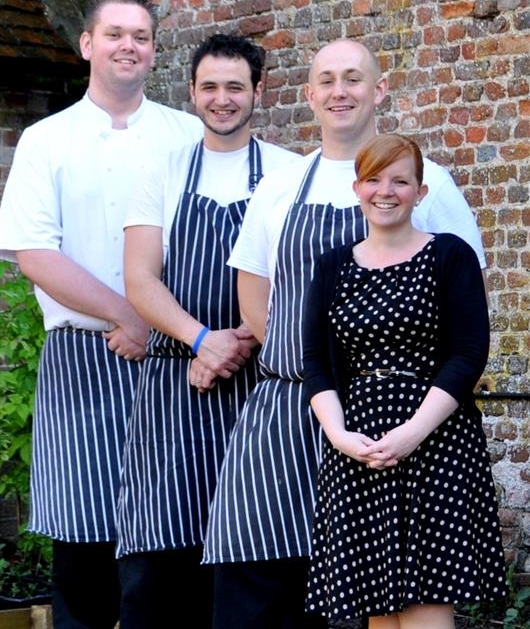 Hampshire restaurants and pubs are celebrating their success in this year’s Good Food Guide 2015.

This new edition features the UK’s Top 50 Pubs for the first time, in response to a changing eating out culture which has seen the rise of the dining pub over the past few years.

For The Crown at Old Basing it is a double celebration. Not only are they a new entry in the Guide (Hampshire‘s only new entry this year), but The Crown has also been selected as one of the UK’s Top 50 Pubs.

The Crown’s Head Chefs Chris Barnes and Tom Wilson were delighted to hear the news.

Chris Barnes says: “It came as a massive surprise. I was made aware of our top 50 inclusion via twitter in the early morning. I honestly thought it was a mistake. It's a real honour to be included with so many great pubs and restaurants, many of which I have eaten at and admired. It's a huge achievement for the team here who work their socks off and now have been recognised in such a prestigious guide. For me personally having previously worked in Good Food Guide-rated establishments it is a humbling experience to see my name in there.

Tom Wilson says:  "It was fantastic news when we found out we were in this national guide. It is a credit to the hard work and commitment of the team at the Crown! I am very proud of everyone involved who has helped to achieve this. All the hard work has paid off; now we have to push on to achieve more! It's also great to have a local business that is now recognised nationally. We hope this news brings more custom to The Crown!"

The Crown is one of two Hampshire Fare members to be listed as Top 50 Pubs – the other is The Plough Inn, Longparish, headed up by Chef Patron and Great British Menu winner James Durrant.

Altogether an impressive three Hampshire pubs made it into this year’s first ever Top 50 Pubs including The Plough Inn, Longparish, coming in at a high ranking 17, The Wellington Arms, Baughurst at 22, and The Crown, Old Basing, at 48.

The Plough at Longparish is described as: A proper foodie pub creating ‘confident, refined, skilful food’ with plenty of panache and a light, modern touch.

The Crown at Old Basing is described as: ‘A real find’ [that’s] all about classy renditions of pub-style food made in-house.

Elizabeth Carter, Consultant Editor of the Good Food Guide commented, referring to entries in the South East region:  “I really am delighted to see so many of the region’s fantastic pubs making an impact on our first ever Top 50 Pub listing.’