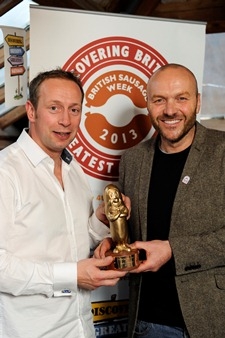 The first regional final was held on Friday 1st November at Old Spitalfields Market in London, the competition will continue to tour the country over the coming week in search of Britain's best sausages. Simon owns Uptons Butchers of Bassett in Southampton and was selected as one of the nine regional finalists from hundreds of entries.

The London and South East final was judged by a panel of experts from British Sausage Week who were joined by celebrity ambassador, the chef and restaurateur Simon Rimmer. After a fierce cook-off the judges decided that the Traditional Pork Sausage from Uptons Butchers of Bassett was the tastiest of them all.

Simon Broadribb was proud to accept the award from Simon Rimmer: 'I am delighted by our win. I was eager to do the very best I could today so I've been experimenting with the sausage to make it as flavoursome as possible whilst keeping it traditional. I came up with a special technique involving using ginger in the preparation process. It added a subtle zing to the final sausage which was much admired by the judges! Our Traditional Pork Sausage is made using local pigs, Hampshire is a great sausage making county and I am proud to be taking this award to its deserving new home!'

The event is held as part of British Sausage Week (4-10 November) which is in its 16th year and is a celebration of the taste, quality and diversity of the great traditional butchers' sausage. With over 470 varieties of sausage in Britain at the last count, and a staggering 1.4 billion meals containing sausages eaten in British homes each year, the competition aims to highlight the quality and depth of sausages being produced today.

In Hampshire we are fortunate to have plenty of local farmers and butchers passionate about producing proper sausages. Use the search function on our website to find butchers, farm shops and producers near you. The link below will also take you to a list of places you can buy quality sausages.