Grow your own: March 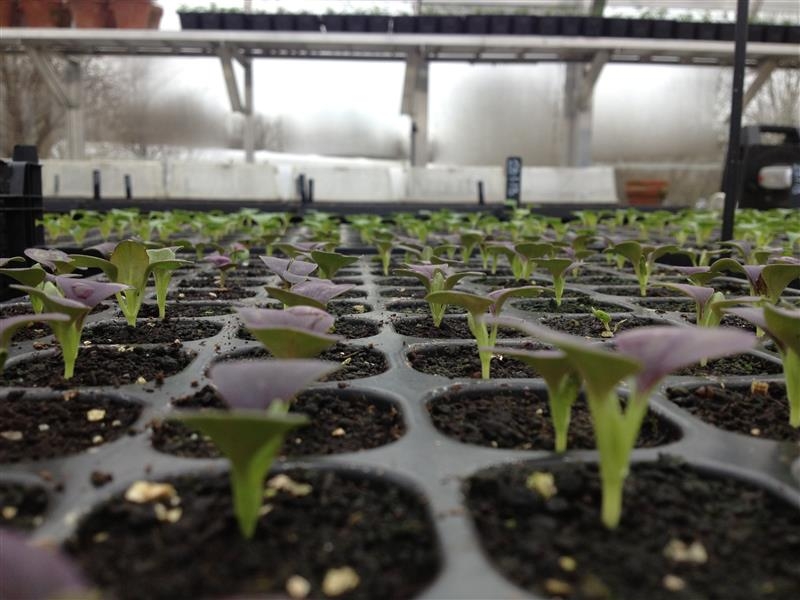 Despite the continual bad weather we have had in February, it is important to remember that with each day that passes when the sun does make an appearance it is starting to get higher in the sky. This means we can start to sow early seeds under glass, as the sunny afternoons warm the soil enough for early seed germination. However, growth is slower than subsequent months so if you can afford to wait a few more weeks then do so. Here at Chewton Glen, as we are trying to produce around 60,000 plants a year we need to start as early in the season as we can.

Over the next few weeks we will be starting to sow, ruby chard, nero di toscana and dwarf green kale, peppers and tomatoes. We will only sow a few trays of each crop weekly at present, almost as a gauge but it is important to make an early start to get our first crops in the ground as soon as the weather breaks.

We use two ways of starting veg and flower seedlings off, and they both work really well. My preferred way is to use modular seed trays, with individual pots within the seed tray, this system is best for larger easier to handle seeds. The advantage with this system is the plants can be left for longer in the seed tray as they have more room to establish, so much so that in most cases the seedling can be planted directly into the ground rather than potted on.

To sow in modular seed trays loosely fill every module with seed compost, then gently compact each module with your finger so the soil compacts down to about ¾ of the module. Place one seed in every hole, finally the seed trays are filled to the top with sieved seed compost and then any excess soil brushed off to expose each individual module.   Each tray is then placed in a shallow tray of water for a couple of hours to moisten the soil from the base and then it is placed in our green house. Our seeds are monitored every day and lightly watered with a watering can and fine rose to keep them damp but not too wet.

For smaller seeds where trying to see let alone handle individual seeds is very difficult we use traditional square and rectangular seed trays. First of all fill the seed tray to 8/10 full with loose seed compost. Using a flat board slightly smaller than the seed tray, compact the soil so it is reasonably firm and level. Gently sprinkle the seeds over the surface of the soil as evenly as possible. Then gently sieve a very light coating of seed compost over the seeds, and finally place a very fine layer vermiculite over the top.  The trays are then gently soaked in a shallow tray of water to moisten the soil from the base and then placed in the green house.

With the weather being so bad in February there is not a massive amount that can be done outside on any veg garden, it is almost a question of waiting for some dry days. At the hotel we are continuing to harvest the last of our winter crops; cabbage, turnips, kale and broccoli are all being taken into the kitchen. We are also removing any crops that have been damaged by pests or have bolted, or for any reason they are not going to form a really good crop. This may seem wasteful but these crops will only harbour pests and diseases which could go onto affect your remaining good crops that are left in the ground.

Once harvested we leave our beds empty for a couple of weeks to give them a chance to recover, for 11 months of the year the beds are being used non-stop and so a break for a few weeks does no harm at all. We will also take the opportunity to add compost to improve soil structure, a generous layer will be spread over the freshly dug soil and simply raked level and then we allow the worms in the soil to do the rest.
Since we have started growing veg, I think the one thing that has made the biggest difference in improving the quality of the veg we are growing year on year is the fact that we have added so much compost to the soil.  Adding compost improves the soil structure, as well as improving the nutrient content and holding of the soil and improving water retention. If you are starting off any veg patch I would recommend creating a compost area of your own, it does not have to be big and expensive or fancy it just needs to be able to hold garden waste in one place and allow air to circulate round it. We started off with old pallets simply tied together, to form wooden frames, this worked really well for a number of years. All our garden waste including old bedding soil from our bedding display pots is first put through a shredder to speed up the process and then put into compost bins. It is turned every couple of months and then in a year you have rich dark compost which is guaranteed to improve your soil and the veg you grow.

One of our main crops we will be growing for the hotel this year will be Jerusalem artichokes, like the rhubarb I mentioned last week it is a good crop to begin with. Last year we only planted a handful of tubers as an experiment however from them we harvested 100KG of tubers. We stored the tubers in our potting shed for a couple of months and this month we have planted them out in two newly created beds.  The tubers need to be planted in rows approximately 12 inches deep and approximately 2 foot apart. Once the tuber is placed in the trenches, we cover them with a 4 inch layer of garden compost, the trenches are then back filled with the natural soil, we will then leave them to start growing. Over the next 6 months they will be well watered and kept weed free but apart from that they are a very easy crop.