Grow Your Own: Green Manure 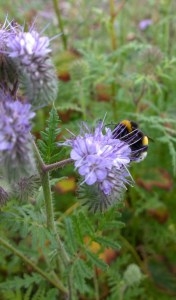 Darren Venables, head gardener at Chewton Glen likes working with nature. This month he has been discovering green manure: plants that help plants

This summer we extended the Nursery Garden to include a new soft fruit area. We always knew that getting plants established in this area would be a challenge as it had been part of the builder’s compound from the treehouse building project and so the ground was compacted and full of debris.
When planting the bushes we dug in generous amounts of Growmore, blood, fish and bone, bone meal and pelleted chicken manure… but the plants still struggled.

Subsequently I dug up a few bushes and found that the heavy soil was making it impossible for them to put down any kind of roots let alone put out enough to absorb the fertiliser being applied.

We were experiencing similar problems with one of our largest rosemary beds which the builders had dug through to install power cables for the treehouses. Prior to the building work healthy rosemary was easy to grow in this area. However afterwards I was left with a heavy clay structure that was basically subsoil and the rosemary struggled and died.

For many years I have been considering experimenting with ‘green manure’. Anne, my veg gardener, has used it very successfully in the past. So after some research we decided to experiment, applying two different ‘green manures’ in each area.

The soft fruit area was my biggest problem. I needed something that could break up the heavy clay and penetrate the stone as well as improve the soil the plants were growing in. I was also keen to improve the fertility of the soil. I discovered a plant called Phacelia tanacetifolia, an annual that grows very quickly, putting on very deep roots that break up heavy soils by pushing deep into them, making cracks in the soil and allowing air, water and plant roots to follow. The other thing about Phacelia is that it absorbs nitrogen and other nutrients from the ground, storing them in the roots and leaves. So when you dig in the plants these nutrients are returned to the ground, improving soil fertility.

There is also another benefit that complements our ecology work: Phacelia flowers are high in really good quality nectar providing even more food for our honeybees as well as bumblebees. The flowers also provide food for young hoverflies, lacewings and ladybirds which help to control the aphid population around the hotel so that we do not have to apply pesticides or insecticides to our crops.

Traditionalists will tell you to let Phacelia grow until it is about to flower and then dig it in. However I am adopting a different approach. As the flowers are important to bees, I am leaving the plants to flower until the frost kills them off. The roots will also be even deeper into the ground before we dig the plants in, and it will give me much more green leaf to dig into the soil, improving the structure. I am not worried about the plants self-seeding. We will just run our little rotorvator over the site every month.

With the Rosemary area we are trying a different approach, using a winter green manure mix containing crimson clover, red clover and white Tilney mustard. The mustard forms a dense carpet over the soil choking weeds and preventing new weeds germinating, while the clovers happily grow among the mustard. When we dig the mustard in, it produces lots of green fibre that helps to improve the organic matter in the soil, thus improving water retention and soil structure.

Meanwhile the clovers do something very clever: they not only absorb nitrogen from the soil, storing it in nodules on their roots, they also absorb it from the atmosphere (especially during a thunder storm when masses of nitrogen is released). So when we dig the clover into the soil, the natural nitrogen levels in the soil should be back to where they should be, and in a form easily used by the next crop.