Five minutes on the pitch 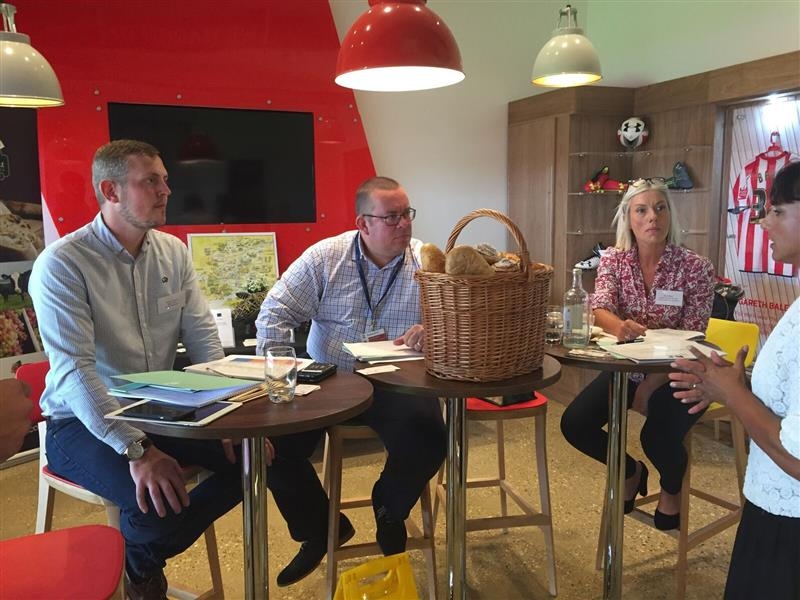 On Friday 9th September over 40 Hampshire food and drink producers had the opportunity to ‘court’ several key local retail and hospitality buyers at a ‘Date a Producer’ event organised by local food group, Hampshire Fare.

The event was held in a box overlooking the pitch at Southampton Football Club and involved buyers from the club itself along with Southampton Airport and The Southern Co-operative. All three organisations have plans to incorporate food and drink from local producers into their offering or increase what they already offer.

Each producer had five minutes to present themselves and their product to the room of buyers. The timer then went off and it was all change with the next producer taking to the hot seat. The buyers were treated to tastings of pies, sausages, chocolates, gin, wine, watercress, coffee, cider, beer, bacon, biltong, chutneys, cheese and more.

Commercial Manager of Hampshire Fare, Tracy Nash explains more: “Hampshire Fare was the matchmaker on Friday introducing local producers to key buyers. In speed-dating style each supplier had five minutes to impress the buyers with their products. I am incredibly proud of our producers, they put a great deal of thought and effort into their pitches. We have a lot of top local food and drink being grown, reared and made in Hampshire and it is wonderful to see local businesses supporting this. Our first ‘Date a Producer’ event has been hugely successful and very well-received by all.”

Geoff Green, Director of Hospitality, Catering and Events at Southampton FC was on the buying panel: “Southampton Football Club is at the heart of the Community and as such wants to support local business where ever possible.  Our Executive Chef is passionate about Hampshire produce and is looking to source seasonal produce throughout the season. We are also keen to ensure that no matter the size of the supplier, quality offerings will be used whether it’s for one menu or a whole season.”

Kate Hibbert, Local Sourcing Manager at The Southern Co-operative was impressed with the event: “I was delighted with the meet the producer event. Southampton FC were consummate hosts and created a friendly, relaxed atmosphere in which to meet the suppliers. It was great to see some of those that we already have strong relationships with and incredibly interesting to meet new faces. In my job, as local sourcing manager, nothing beats coming face to face with people whose passion is their product, you could feel the enthusiasm as they pitched to us. Certain requirements have to be met when working with retailers such as ourselves so I hope that detailing these would also have been a useful exercise for the suppliers. The Southern Cooperative's Local Flavours range celebrates local sourcing and there will certainly be some new additions to this range following what was an incredibly interesting and insightful day.'

The producers came away from the day feeling positive about the opportunity. Sylvia Puckett owns JS Fresh Fish based at Shamrock Quay near Southampton: “J & S Fresh Fish have a passion to provide quality fresh fish to the public, also to distribute to the wholesale market in the Hampshire area, enabling us to support our local fishermen. We were really encouraged by the buyers we met and believe they were definitely supportive in sourcing local produce and supporting local businesses.”