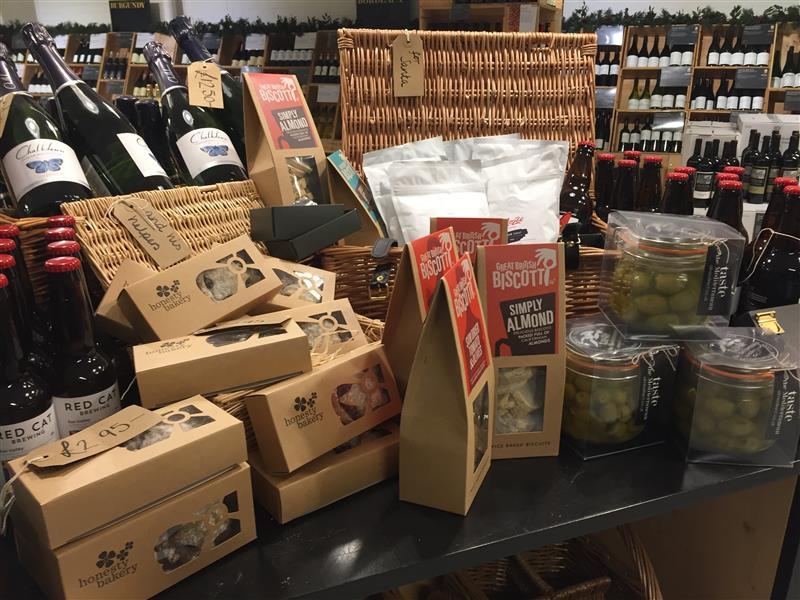 There was plenty of festive fare at Hampshire Fare's latest networking event at Berry Bros & Rudd’s festive ‘Pop-Up’ shop in its Warehouse Store at Houndmills, Basingstoke.

The ‘Pop-Up’ aims to provide the opportunity for shoppers to buy delicious local produce for their drinks parties and celebrations over Christmas and New Year when they pick up their wine.

As ever, members were keen to be involved - with cheesemakers Izzy Griffin and Debi Pidgeon of Briddlesford Farm Dairy, Isle of Wight, taking the award for longest distance travelled. Meanwhile Brian Layton of ANVIL Coffee Roasters won the Paris Smith-sponsored bottle of fizz; supplied by Exton Park.

Hampshire Fare producers supplying the ‘Pop-Up’ include Great British Biscotti, Honesty Bakery, Olives Direct and Meon Valley Christmas Trees. Plus there is a wide selection of drinks, including ales from Red Cat Brewing, Chalkdown cider, cordials from Yarty, mead from Chalice Mead, tomato juices for the perfect ‘Bloody Mary’ from Turner & Hardy, and Mozzo for that after dinner cup of coffee.

Tracy Nash, Commercial Manager, Hampshire Fare, said: “This is a fantastic store and it was great to see so many of our members’ products taken on, and very satisfying to see such support for Hampshire Fare producers."